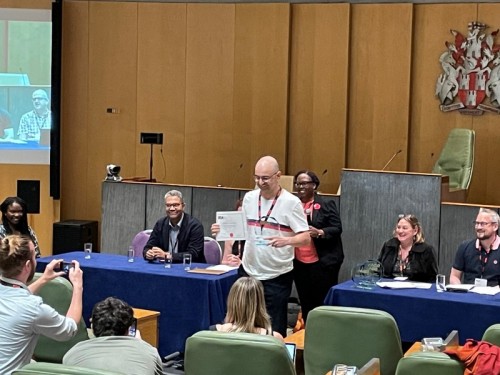 The British International Studies Association presents its annual awards to recognise excellence and achievement in research and teaching in the field of international studies at its conference every year.  To support the work of new scholars, the Michael Nicholson thesis prize is awarded annually for the best doctoral thesis in international studies. It has promoted outstanding work in many sub-fields over the years. Previous winners have often gone on to pursue successful academic careers.

The 2022 prize was awarded to former Manchester PhD student and currently lecturer in the Politics department, Franco Galdini.

The prize jury noted that Franco's PhD, The Post-Soviet Space and Uzbekistan in the International Division of Labour: From Transition to Capital Accumulation, was extremely impressive and made a substantial contribution to the literature on the political economy of transition in the former Soviet Union and to debates over combined and uneven development. Franco’s thesis foregrounded how an understanding of global capital accumulation can aid in demystifying the transformation of Uzbekistan in the post-communist period. According to the judging panel, Franco’s PhD was composed of a sophisticated and well organised Marxist approach that also drew on the additional insights of Feminist and Green perspectives.