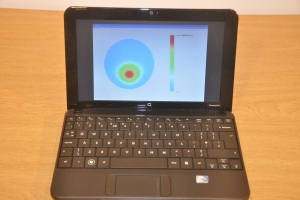 Women could have a fast test for breast cancer and instantly identify the presence of a tumour in the comfort of their own home thanks to ground-breaking new research from The University of Manchester.

Professor Zhipeng Wu has invented a portable scanner based on radio frequency technology, which is able to show in a second the presence of tumours – malignant and benign – in the breast on a computer.

Using radio frequency or microwave technology for breast cancer detection has been proven by researchers in the US, Canada and UK.

However, up to now, it can take a few minutes for an image to be produced, and this had to be done in a hospital or specialist care centre.

Now Professor Wu, from the University’s School of Electrical and Electronic Engineering, says concerned patients can receive real-time video images in using the radio frequency scanner which would clearly and simply show the presence of a tumour.

Not only is this a quicker and less-intrusive means of testing, it also means women can be tested at GP surgeries, which could help dramatically reduce waiting times and in some cases avoid unnecessary X-ray mammography. The scanner could also be used at home for continuous monitoring of breast health.

The patented real-time radio frequency scanner uses computer tomography and works by using the same technology as a mobile phone, but with only a tiny fraction of its power.

This makes it both safe and low-cost and the electronics can be housed in a case the size of a lunch box for compactness and portability. Other existing systems are much larger.

Breast cancer is the second biggest killer in women, accounting for 8.2% of all cancer deaths.  October is National Breast Cancer Awareness month.

The usual way of detecting breast cancer up to now is mammography, which works well for women over the age of 50 and can give results of up to 95% accuracy.

But it is far less effective for younger women. The detection rate could be as low as 60% for women under the age of 50, which accounts for 20% of all breast cancer cases.

At that stage it is even more important get accurate diagnosis. Early diagnosis and treatment could save thousands of lives.

The main difference between the two methods is that mammography works on density, while radio frequency technique works on dielectric contrasts between normal and diseased breast tissues.

In Professor Wu’s design, as soon as the breast enters the cup an image appears on screen.

The presence of a tumour or other abnormality will show up in red as the sensor detects the difference in tissue contrasts at radio frequencies.  Malignant tissues have higher permittivity and conductivity and therefore appear differently than normal ones to a screen.

Up to 30 images are generated every second, meaning a breast scan could be over in a far shorter time than they are currently.

Professor Wu said: “The system we have is portable and as soon as you lie down you can get a scan – it’s real-time.

“The real-time imaging minimises the chance of missing a breast tumour during scanning.

“Other systems also need to use a liquid or gel as a matching substance, such as in an ultrasound, to work but with our system you don’t need that – it can be done simply in oil, milk, water or even with a bra on.

“Although there is still research to be done, the system has great potential to bring a new way for breast cancer diagnosis.

“This will benefit millions of women in both developed and developing countries bearing in mind that one in nine women may develop breast cancer in their lifetime.”

Professor Wu submitted his innovation of the sensor system to the IET Innovation Awards. The technology has been shortlisted in both Electronics and Measurement in Action categories. The winners will be announced in November.

Professor Wu is available for interview on request.

Images of the sensor system and videos of how it works are available from the press office.