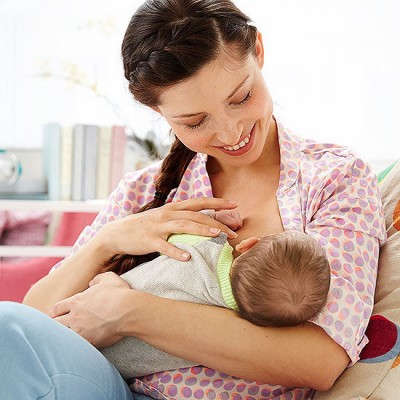 A ground-breaking study into the changes that occur in a woman’s breast, from growing into one that provides milk for a new-born, and then back to its normal state, has discovered that milk-producing cells are, in effect, cannibalised by other cells following the period of breastfeeding.

The human body can usually cope with the limited amount of detritus created from normal cellular lifecycles through the deployment of immune cells to remove the material. But just how it manages to eradicate the large amounts of dead or redundant mammary cells, and left over milk, following breastfeeding without triggering inflammation due to the quantities of immune cells which would be needed, wasn’t fully known.

During the lactation process, women produce vast quantities of milk for their babies - up to nearly a litre per day. To do this breasts change dramatically during pregnancy, developing the tissue so that cells can make lots of milk. But when weaning finishes, the breasts need to be remodelled so that they can return to a non-pregnant form.

Soon after lactation, many of the milk-making cells are killed off, in a process called ‘apoptosis’. It had been thought that they were then removed through phagocytosis – flushing away the redundant cells by immune cells.

However Nasreen Akhtar, the scientist who carried out this study and who is now a Fellow at the University of Sheffield, and her supervisor Charles Streuli, Professor of Cell Biology at The University of Manchester, were intrigued why there was no significant inflammation, pain and tissue damage associated with phagocytosis on such a big scale.

Although we cannot be certain at this point, Rac1 may be crucial for breast cancer development. We are studying this process, as it could provide new opportunities for treating the disease

Dr Akhtar said: “Immune-cell phagocytosis might be extremely painful and damaging. So we thought something else must be standing in for the immune cells. What we didn’t expect to find was a molecular switch that turned milk-secreting cells into cannibalistic cell eaters. We discovered that these cells were now able to eat or otherwise remove vast quantities of redundant milk-producing cells.”

It turned out that a protein called Rac1 is central for the cellular switch. Dr Akhtar found that Rac1 is vital for milk production as well as for the tissue remodelling that occurs after lactation. Moreover, Rac1 also triggers the ‘part-time’ phagocytic activity that is carried out by the breast epithelial cells. Indeed, Rac1 was needed for clearing post-lactating dead cells and residual milk, helping to reshape the breast back to non-pregnancy.

The study, reported in the journal Developmental Cell, was one of the first to look at how the breast remodels back to its ‘normal’ state after babies have stopped suckling, revealing a central requirement for the Rac1 signalling protein.

There may also be a role for Rac1 in breast cancer. “Although we cannot be certain at this point, Rac1 may be crucial for breast cancer development. We are studying this process, as it could provide new opportunities for treating the disease,” Professor Streuli said.

“And in the future, there may be completely new ways to treat breast cancer – if normal breast cells can eat their slightly altered neighbours, could we find a way to get healthy cells to consume and destroy all the cancer cells?”

The research was reported in a publication ‘Rac1 controls both the secretory function of mammary glands and its remodelling for successive gestations’ in the journal Developmental Cell; the paper can be found here.