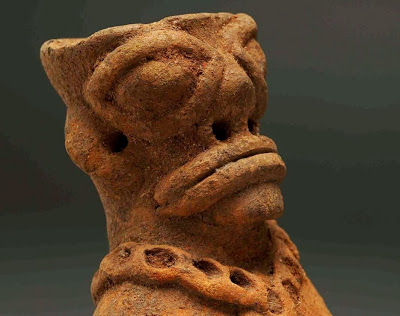 Researchers from The University of Manchester have completed the very first biological analysis of ancient terracotta figurines found in Ghana, which were created by an unknown civilisation and have become iconic representations of prehistoric African art.

The hundreds of figurines excavated so far suggest a high level of ritual activity at the site. Some of the figurines contain hollow cavities, which the researchers believe substances were poured into during these rituals.

The figurines were exhibited in 2014 at Manchester Museum’s ‘Fragmentary Ancestors’ exhibition. Despite the fact that high temperatures typically accelerate DNA damage, and there are only a few previous reports of the recovery of ancient DNA from exposed sites in Sub-Saharan Africa as a result, Professor Terry Brown and PhD student Heather Robinson managed to recover ancient DNA from inside three of the figurines using forensic-style swabs and a magnetic extraction method.

The findings of the researchers suggest that exotic plants such as banana and pine, which are not native to Ghana, were prized by the unknown ancient culture for use in religious rituals as well as other West African plants. Banana and pine could only have been obtained via trade with North Africa, and suggest that the prehistoric inhabitants of the Yikpabongo archaeological site were connected to other parts of the World via trade, because banana is an east Asian cultigen.

This has been an excellent example of the way in which archaeologists and DNA scientists can work together. We were invited to sample the figurines when they were exhibited at the Manchester Museum in 2013, and the interpretation of the DNA results with our collaborators in Ghana has been very exciting.

It is hoped that the findings, published in Volume 79 of the Journal of Archaeological Science, will boost local and international efforts to protect the figurines which have been subject to illegal excavation and trade in the past.

The paper, Ritual complexity in a past community revealed by ancient DNA analysis of pre-colonial terracotta items from Northern Ghana, can be viewed here.