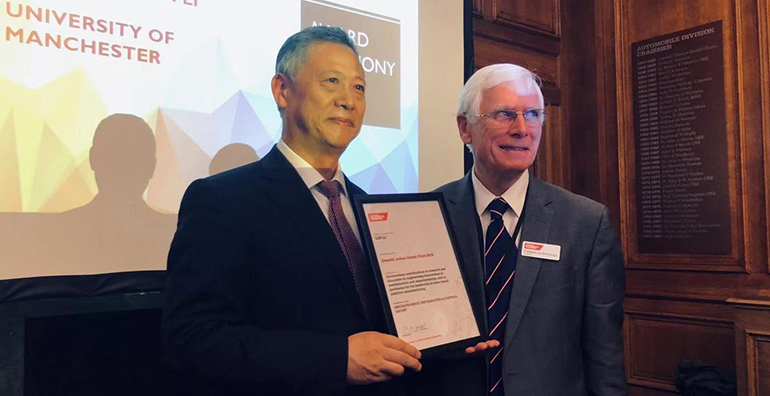 Professor Lin Li, Director of the Laser Processing Research Centre in the Department of Mechanical, Aerospace and Civil Engineering at The University of Manchester, has received not one but two prestigious awards.

He collected the Arthur L. Schawlow Award from the Laser Institute of America (LIA) during its annual meeting at the 38th International Congress on Applications of Lasers and Electro-Optics in Orlando, US, on 9 October 2019; and the 2018 Donald Julius Groen Prize from the Institution of Mechanical Engineers (IMechE) in London a week later.

The award from the LIA came in recognition of Professor Li's 'pioneering research and development of laser-based manufacturing processes, and his entrepreneurial drive and vision to commercialise technologies'. It was presented to Professor Li by the LIA's past-President, Professor Milan Brandt.

Arthur Schawlow was a Nobel Laureate in Physics for his contribution to the development of laser spectroscopy. The LIA established the Arthur L. Schawlow Award in 1982 to recognise individuals who have made outstanding, career-long contributions to basic and applied research in laser science and engineering, leading to fundamental understanding of laser materials interaction and/or transfer of laser technology for increased application in industry, medicine and daily life.

The IMechE award was given to Professor Li for his 'outstanding contributions to research and education in engineering innovations in mechatronics and manufacturing, and in particular for his leadership in laser-based additive manufacturing'.

It was presented by President of IMechE Professor Joe McGeough, and was nominated by the Division of Mechatronics, Informatics and Control Group Board of IMechE. Established in 1847, IMechE now has 120,000 members in 140 countries.