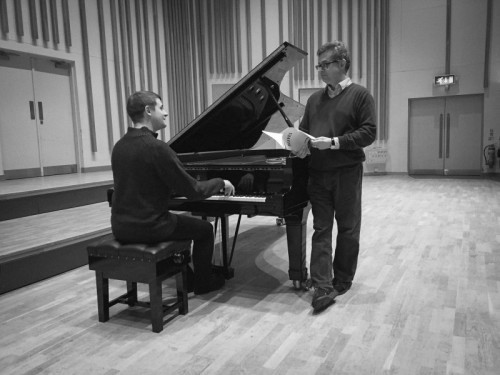 Professor Camden Reeves’s new album, Blue Sounds for Piano, will be released on the Metier label on 13 May 2022. The record was recorded by pianist Tom Hicks, (alumni of the University of Manchester), after around 10 years of collaboration on three substantial piano works: Tangle-Beat Blues, Nine Preludes and Blue Sounds for Piano. Tom has toured these works extensively over the years, including in a profile recitals of all three works, in London and Chicago, in 2019 and 2020.

The album with be released in CD form and digitally on streaming platforms (including Amazon and Spotify).

‘It’s a real joy to see this disc come into reality, as both a celebration of this collaboration and a permanent record of our work together. Tom is one of the most astonishing pianists of his generation. That was clear to all, right from his first year as a student here. It’s been wonderful to see his career go from strength to strength, and to be part of that journey with him. I’m really pleased with the Artwork too. The artwork was done by another University of Manchester alumni – Maria Kolpatchki. Maria graduated with a BMus last year. She had done lots artwork for the University Music Society (posters, programmes and the like). It caught my eye, so I asked her if she’d like to do this. With Tom at the piano, and with Maria’s artwork, to me the result looks and sounds stunning. I’m delighted with it.’