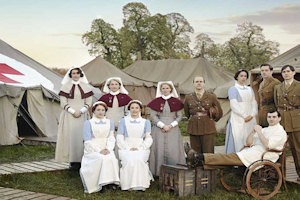 A University of Manchester academic from the School of Nursing has taken a journey back in time to help television producers recreate a 1915 field hospital for new BBC drama The Crimson Field which begins on Sunday.

After an initial chat, Professor Hallett was signed up as a historical advisor for the drama. This involved spending several months reading and commenting on scripts and a week working with the cast and production crew filming on location in Wiltshire and rubbing shoulders with actors including Oona Chaplin, Hermione Norris (Cold Feet, Spooks) and Suranne Jones (Coronation Street).

The BBC drama by Sarah Phelps presents one of the Great War’s untold stories. Set in a tented field hospital on the coast of France, a team of doctors, nurses and women volunteers work together to heal the bodies and souls of men wounded in the trenches.

The hospital is a frontier: between the battlefield and home front, but also between the old rules, hierarchies, class distinctions and a new way of thinking. Hospital workers face a daily battle to patch the men up and keep the war machine churning. Staff numbers are low and the volunteers are desperately needed.

Professor Hallett spoke to the lead actors about what work would have taken place at a field hospital during the war and demonstrated some nursing techniques including bed bathing, bandaging, bed-making and aseptic and antiseptic wound care, used at the time to prevent infection spreading between soldiers’ wounds.

Professor Hallett said: “The producers wanted to know what would have been going on in a busy field hospital during the first world war and I had to demonstrate wound dressing techniques from the time.

“I lot of the supporting actors had worked on Casualty and so they were very interested to see how medical practices had changed. One big change they noticed was the lack of any lifting equipment in 1915 to move patients.

“Most of our knowledge of medics working from that time comes from photographs and written witness accounts and letters – so lots of fragments from which the production team had to try to build up a picture.

“It was amazing to see how they had recreated two wards and several other tents and it felt very authentic although of course some artistic licence is involved.

“It’s the first time I’ve ever advised on a television series and it is quite a challenging role. I stayed 10 minutes from the set and could be called on at any time. The days spent rehearsing and advising on filming were long and not all of the production team's questions could be answered – because there is no way of knowing precisely how things would have been in 1915, and there are no eye-witnesses left.

“Sometimes it could be quite difficult because they might want to do something one way for the drama but I’d have to come in and say ‘no I’m sorry they wouldn’t have done that in 1915’.

“It was very hard work and something I’ll never forget taking part in. I was impressed with the professionalism of the director, actors and production team. Everyone I met was so committed to what they were doing and I’m looking forward to watching the end product on Sunday.”

The Crimson Field is a six part series and begins on Sunday 6 April 9pm on BBC One.

For further information about the programme please visit the BBC Media Centre.

For information about the University of Manchester or to talk to Professor Hallett, please contact Alison Barbuti, Media Relations Officer, 0161 275 8383 Mob. 07887 561 318 alison.barbuti@manchester.ac.uk