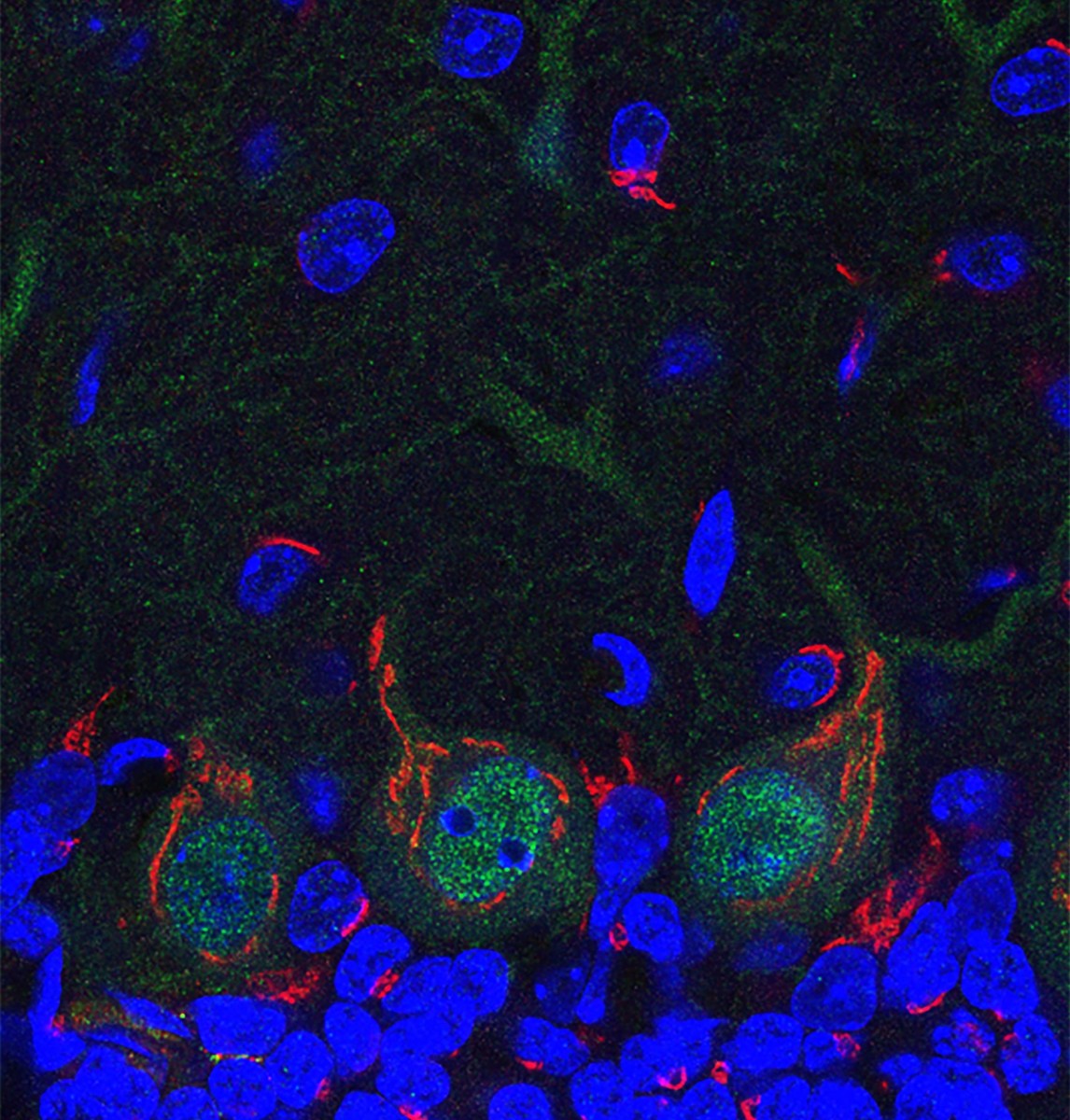 Neurodegeneration
Pictured is the cerebellar region of a mouse brain labelled for the Golgi apparatus (red), DNA (blue) and Purkinje neutrosn (green). The Purkinje neurons have an elaborate Golgi, as first observed by Camillo Golgi when he discovered the organelle in 1898. Liu et al have shown that Golgi positioning and organisational are disrupted in mice lacking the Golgi protein GM130, which leads to death of Purkinje neurons and ataxia.

Disabling a part of brain cells that acts as a tap to regulate the flow of proteins has been shown to cause neurodegeneration, a new study from The University of Manchester has found.

The research, which was carried out in mice, focused on the Golgi apparatus - a compartment inside all cells in the body that controls the processing and transport of proteins. It is fundamental for the growth of the cell membrane and also for the release of many types of proteins such as hormones, neurotransmitters and the proteins that make up our skeletons.

Working with Chinese colleagues, the Manchester researchers examined the role of the Golgi apparatus in neurons, or brain cells, and found that mice in which the apparatus was disabled suffered from developmental delay, severe ataxia, and postnatal death.

Ataxia is a term for a group of disorders that affect co-ordination, balance and speech. Any part of the body can be affected, but people with ataxia often have difficulties with balance and walking, speaking, swallowing, tasks such as writing and eating, and vision. It can be inherited, brought on through incidents such as a stroke, or through old age.

Although the function of the Golgi apparatus, named after its Italian discoverer, is well understood, it has not been previously been shown to have a role in neurodegeneration. With these results the scientists think they may have found a new avenue to explore in the search for the causes of some neurodegenerative diseases. 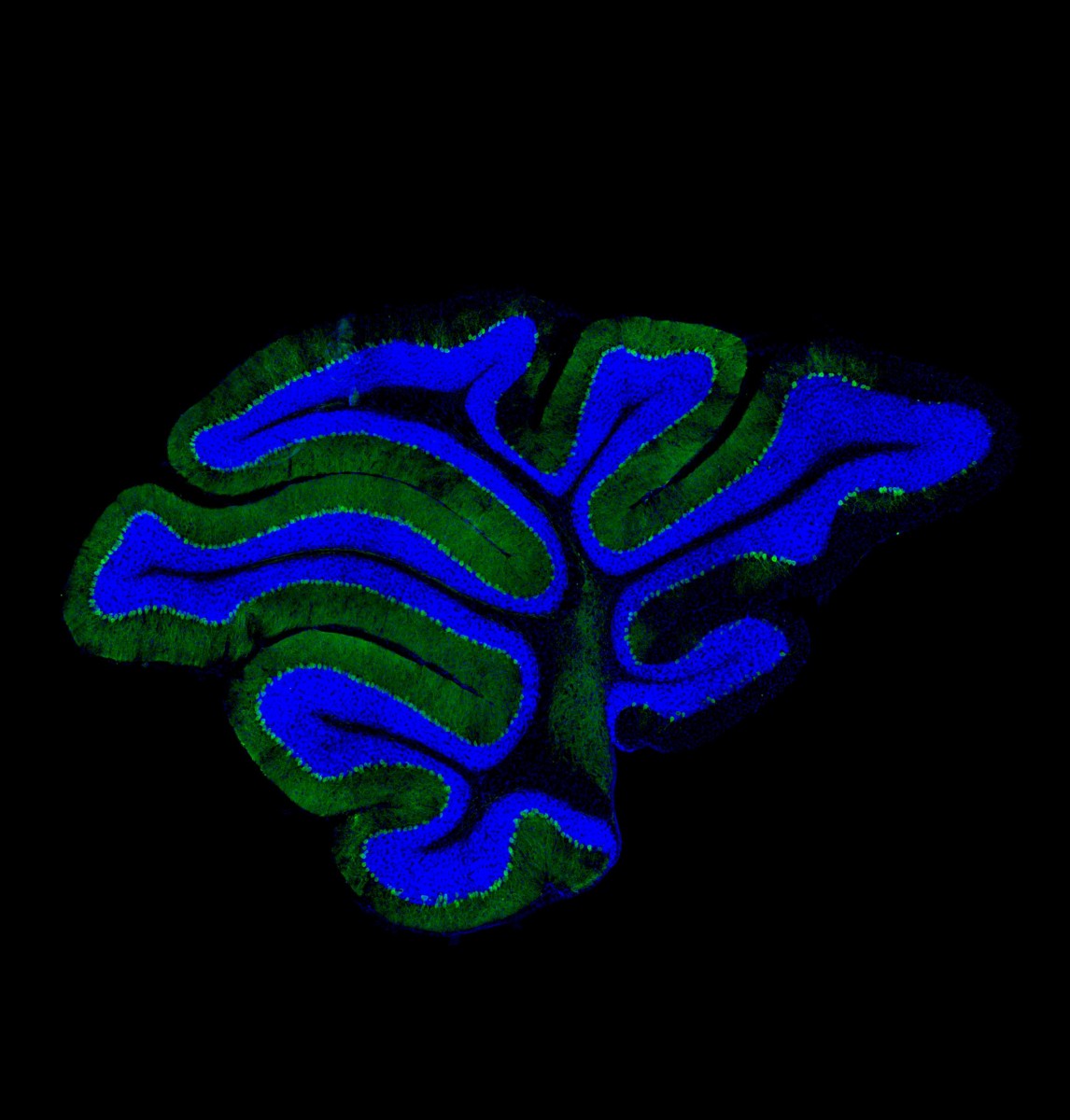 Neurodegeneration
Pictured is the cerebellar region of the brain of a mouse lacking the Golgi protein GM130 with the Purkinje neurons labelled in green and DNA in blue. There is loss of Purkinje neurons in the lobes on the right hand side, which results in inability to coordinate muscle movement (ataxia)

Professor Martin Lowe, the lead researcher, said: “Our results, combined with previous work, suggest that during the cellular changes that occur, loss of the Golgi function could be an important intermediary step that contributes to cell death.”

How much the Golgi apparatus contributes to the major neurodegenerative diseases such as Alzheimer’s or Parkinson’s is something that is currently unclear, though other studies have made this link.

Professor Lowe added: “Together with other published work our findings suggest that in certain neurodegenerative diseases the loss of function of the Golgi apparatus may contribute to the pathology that is occurring.” 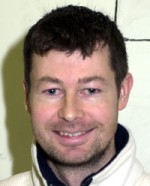 Our results, combined with previous work, suggest that during the cellular changes that occur, loss of the Golgi function could be an important intermediary step that contributes to cell death

The study was carried out by The University of Manchester and the Shilai Bao lab at the Chinese Academy of Sciences in Beijing. Funding was provided by a joint grant between The University of Manchester and the Chinese Academy of Science at Beijing, as well as separate funding to both institutions, from the BBSRC and the National Natural Science Foundation of China.