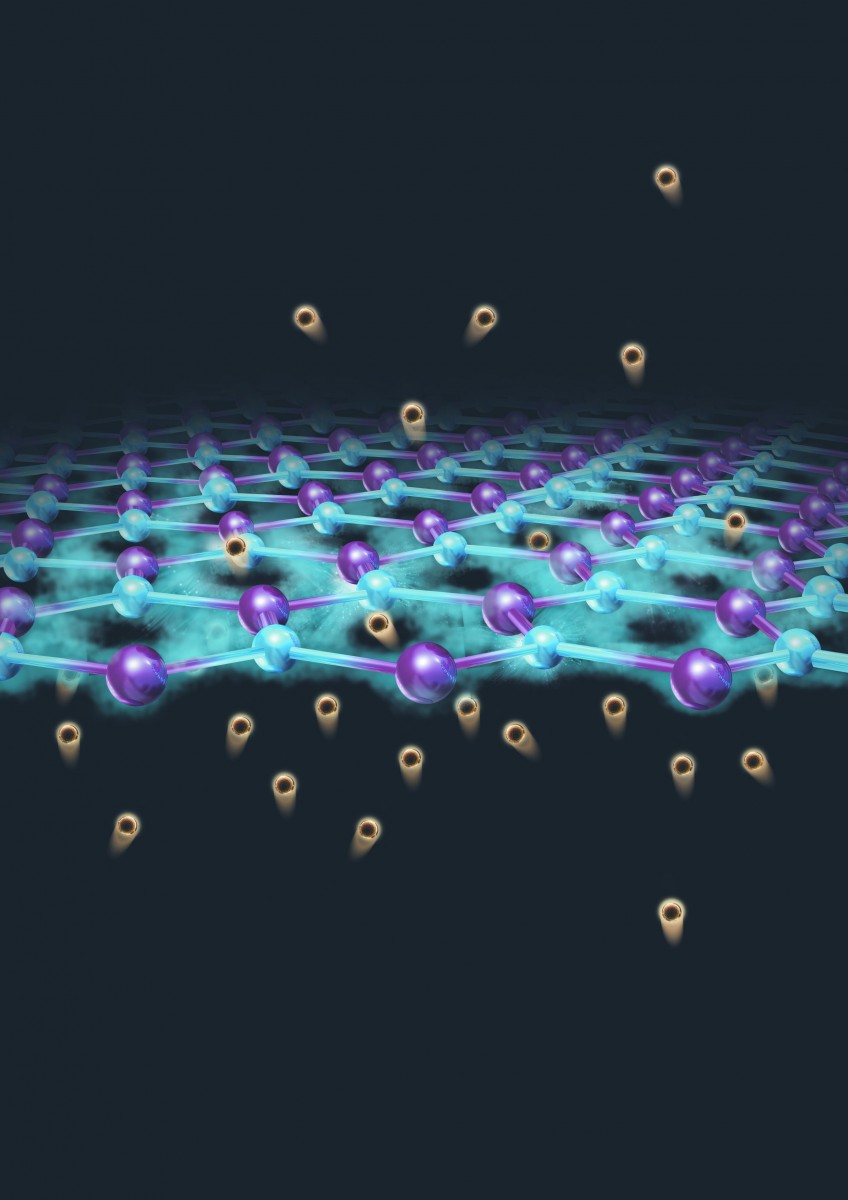 Researchers at The University of Manchester have discovered another new and unexpected physical effect in graphene – membranes that could be used in devices to artificially mimic photosynthesis.

The new findings demonstrated an increase in the rate at which the material conducts protons when it is simply illuminated with sunlight. The ‘photo-proton’ effect, as it has been dubbed, could be exploited to design devices able to directly harvest solar energy to produce hydrogen gas, a promising green fuel. It might also be of interest for other applications, such as light-induced water splitting, photo-catalysis and for making new types of highly efficient photodetectors.

Graphene is a sheet of carbon atoms just one atom thick and has numerous unique physical and mechanical properties. It is an excellent conductor of electrons and can absorb light of all wavelengths.

Researchers recently found that it is also permeable to thermal protons (the nuclei of hydrogen atoms), which means that it might be employed as a proton-conducting membrane in various technology applications.

To find out how light affects the behaviour of protons permeating through the carbon sheet, a team led by Dr Marcelo Lozada-Hidalgo and Professor Sir Andre Geim fabricated pristine graphene membranes and decorated them on one side with platinum nanoparticles. The Manchester scientists were surprised to find that the proton conductivity of these membranes was enhanced 10 times when they were illuminated with sunlight.

Dr Lozada-Hidalgo said: “By far the most interesting application is producing hydrogen in an artificial photosynthetic system based on these membranes.”

Prof Geim is also optimistic: “This is essentially a new experimental system in which protons, electrons and photons are all packed together in an atomically thin volume. I am sure that there is a lot of new physics to be unearthed, and new applications will follow.”

Scientists around the world are busy looking into how to directly use solar energy to produce renewable fuels (such as hydrogen) by mimicking photosynthesis in plants. These man-made ‘leaves’ will require membranes with very sophisticated properties – including mixed proton-electron conductivity, permeability to gases, mechanical robustness and optical transparency.

Currently, researchers use a mixture of proton and electron-conducting polymers to make such structures, but these require some important trade-offs that could be avoided by using graphene.

This is essentially a new experimental system in which protons, electrons and photons are all packed together in an atomically thin volume. I am sure that there is a lot of new physics to be unearthed, and new applications will follow

Using electrical measurements and mass spectrometry, the researchers say that they measured a photoresponsivity of around 104 A/W, which translates into around 5000 hydrogen molecules being formed in response to every solar photon (light particle) incident on the membrane. This is a huge number if compared with the existing photovoltaic devices where many thousands of photons are needed to produce just a single hydrogen molecule.

“We knew that graphene absorbs light of all frequencies and that it is also permeable to protons, but there was no reason for us to expect that the photons absorbed by the material could enhance the permeation rate of protons through it.” says Lozada-Hidalgo.

“The result is even more surprising when we realised that the membrane was many orders of magnitude more sensitive to light than devices that are specifically designed to be light-sensitive. Examples of such devices include commercial photodiodes or those made from novel 2D materials.”

Photodetectors typically harvest light to produce just electricity but graphene membranes produce both electricity and, as a by-product, hydrogen. The speed at which they respond to light in the microsecond range is faster than most commercial photodiodes.