“Quite unsuitable for females” – 100 years since women’s football ban 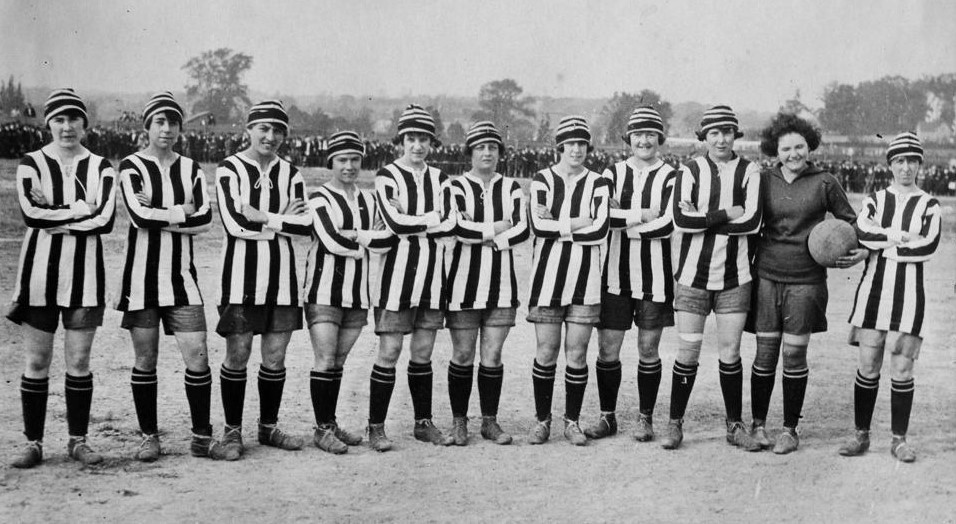 “Quite unsuitable for females” – 100 years since women’s football ban

2021 marks 100 years since the Football Association banned women’s football in England - to mark the anniversary, an expert from The University of Manchester has published work which describes how women fought to earn the right to play before the ban, and how this echoed the wider struggle for women’s rights in society.

Women had begun playing organised football matches at the same time as men, and while it was recognised by the Football Association, players faced a great deal of hostility and many even had to play under assumed names for their own protection. They also faced the difficulty of playing in cumbersome clothes which impeded the movement of the body.

Pioneers of organised women’s football included early advocates of women’s rights, many years before women’s suffrage became a mass movement. ‘Nettie Honeyball’ - the founder of the British Ladies’ Football Club - told a newspaper that she looked forward to the time “when ladies may sit in Parliament and have a voice in the direction of affairs, especially those that concern them most.”

World War One fundamentally changed the role of women in society, and football became a source of empowerment. Women took up the roles of the men who had gone to fight, working in munitions factories and other heavy industries. Women’s football was encouraged to bolster their morale and increase productivity – by the end of the war, nearly every factory had its own ladies’ team.

Because the men’s league had been suspended in 1915, women’s football became enormously popular - by 1921 there were 150 women’s clubs, often playing in front of capacity crowds with gate receipts raising money for charities. However, the end of the war saw the ‘plucky little women’ who had kept the factories open once again being primarily regarded as housewives and mothers.

On 5 December of that year, the Football Association Council – made up of 60 upper-class male members - banned women’s football from being played at their grounds or officiated by their referees using the reasoning that it was a “danger to women’s health” - sympathetic medical experts asserted that being hit by a football could damage their child-bearing ability. They also said funds raised at matches had been misused to cover players’ expenses, and there was concern that money raised was being used to support striking miners and their families.

After the ban the remaining women’s football teams played at rugby grounds and other venues, and continued to tour abroad - however, the games no longer attracted the same large audiences as the male footballers who had returned to their traditional stadiums, and interest faded away.

In the following decades the attitude to women in society changed dramatically, but change in the Football Association came slowly - it took fifty years for them to finally lift the ban in 1971, after an English women’s team had become popular by taking part in an unofficial world cup in Mexico.

Another fifty years later, women’s football has come full circle and is hugely popular once again - the 2010 founding of the WSL saw clubs such as Manchester City form professional women’s teams which attract large attendances at their games, players like Lucy Bronze are followed by millions on social media, and the nation eagerly follows the progress of the ‘Lionesses’, the national women’s team.

The changing view of women’s football is illustrated by the case of Lily Parr, a pioneering player who was not recognised at all by the authorities during her lifetime. In 2002 she was the first woman to be inducted into the National Football Museum’s Hall of Fame, and the public voted for her inclusion in BBC History’s ‘100 women who have changed the world’ alongside suffragettes such as Emmeline Pankhurst. To me, this underlines the political importance of women’s football as a source of empowerment.