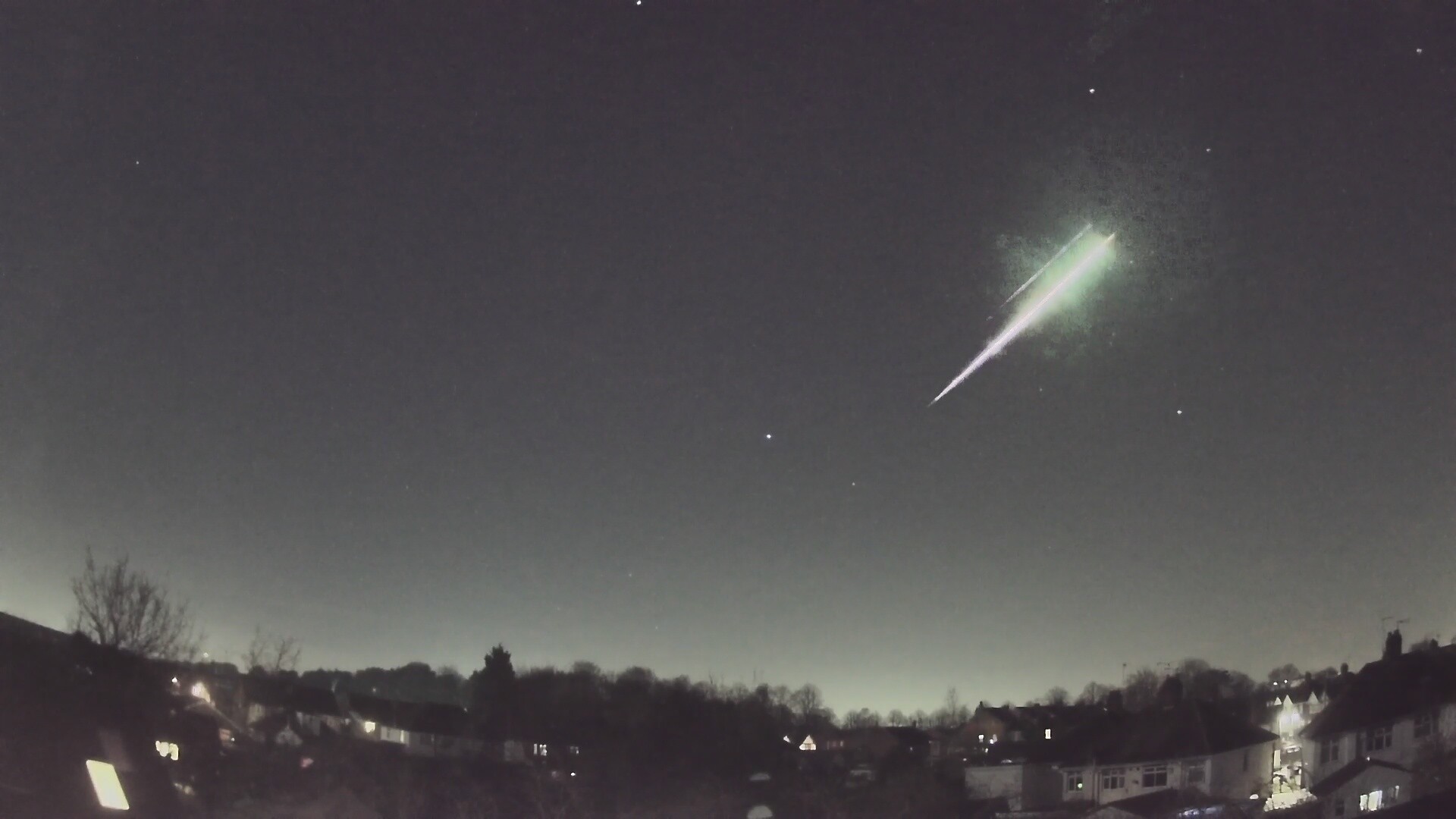 From a video by Ben Stanley, processed by Markus Kempf, the AllSky7 network

In a major event for UK science, the meteorite that fell from the fireball that lit up the sky over the UK and Northern Europe on Sunday 28 February, has been found.

Almost 300g of a very rare meteorite, known as a carbonaceous chondrite, survived its fiery passage through the Earth’s atmosphere and landed on a driveway in the small Cotswold town of Winchcombe. Other pieces of this exceptional meteorite have now been recovered in the local area. Specialised cameras across the country were able to recreate the flight path, allowing scientists to determine exactly where in the solar system it came from, and predict where it fell. The original space rock was travelling at nearly 14km per second before hitting the Earth’s atmosphere.

The meteorite was retrieved in such a good condition, so quickly after its fall, that it is comparable to the samples returned from space missions, both in quality and quantity.

Dr Ashley King, UK Research and Innovation Future Leaders Fellow in the Department of Earth Sciences at the Natural History Museum, was among the first on the scene when the meteorite was discovered on Wednesday and has been advising on the handling and care of the meteorite since. He says: “Nearly all meteorites come to us from asteroids, the leftover building blocks of the solar system that can tell us how planets like the Earth formed. The opportunity to be one of the first people to see and study a meteorite that was recovered almost immediately after falling is a dream come true!”

Dr Katherine Joy, a Royal Society University Research Fellow at The University of Manchester said: “This is a hugely exciting scientific event as it is the first time in 30 years that a meteorite sample has fallen and been recovered in the UK. Normally we have to send spacecraft to collect bits of other worlds, but this time one has fallen right into our laps! We look forward to using our laboratories in Manchester and working with our colleagues to investigate how the newly recovered UK meteorite fall can provide insights to how planets in the early Solar System were formed.”

This is a hugely exciting scientific event as it is the first time in 30 years that a meteorite sample has fallen and been recovered in the UK. Normally we have to send spacecraft to collect bits of other worlds, but this time one has fallen right into our laps! We look forward to using our laboratories in Manchester and working with our colleagues to investigate how the newly recovered UK meteorite fall can provide insights to how planets in the early Solar System were formed. 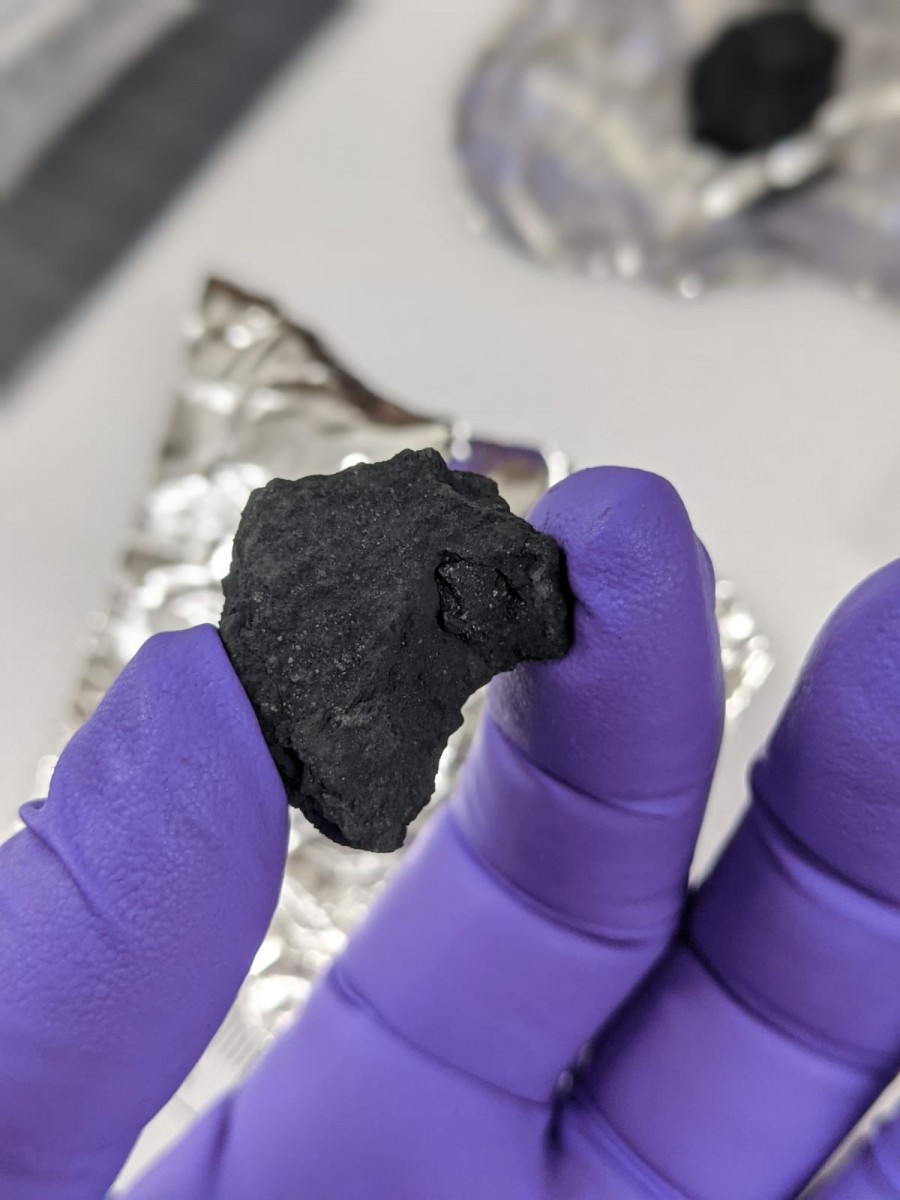 Dr Richard Greenwood, Research Fellow in Planetary Sciences at the Open University was the first scientist to identify and advise on the meteorite. Dr Greenwood says: "I was in shock when I saw it and immediately knew it was a rare meteorite and a totally unique event. It’s emotional being the first one to confirm to the people standing in front of you that the thud they heard on their driveway overnight is in fact the real thing."

Once the meteorite was identified as genuine, plans were made for it to be safely moved to the Natural History Museum where it will be properly cared for until it begins an official process of classification to establish its validity and scientific significance.

A victory for UK citizen science, the fireball was seen by thousands of eyewitnesses across the UK and northern Europe, many of whom reported it to the UK Meteor Observation Network, and was captured on many fireball cameras and home surveillance cameras when it fell to Earth at 21:54 on Sunday 28 February.

Meteorites are incredibly old – their age of about 4567 million years is much older than any rock from the Earth. Almost all these “space rocks” have been blasted off asteroids, and travel for many thousands of years through space before being captured – usually by the Sun, but occasionally by Earth. They travel through the atmosphere, sometimes – like the one that fell in Gloucestershire – producing a bright fireball before landing on Earth. Over 1000 meteorites the size of a football are believed to fall to Earth every year, however it is very rare for any of them to be seen to fall and recovered.

Carbonaceous chondrites, like the one just discovered, are made of a mixture of minerals and organic compounds – including amino acids. They are the most primitive and pristine materials of the solar system and can provide unique information on where water and the building blocks of life were formed and what planets are made from - some of the biggest questions asked by the scientific community.

The team believe that more fragments may yet be discovered. This fragile meteorite may be found as black stones, or as piles of tiny rock or even dust. If you are local to the area and find something that could be meteorite, please be sure to take a photo of it and record its location, before collecting the sample using a gloved hand or in aluminium foil and contacting the Natural History Museum. However, please respect local lockdown COVID-19 regulations.