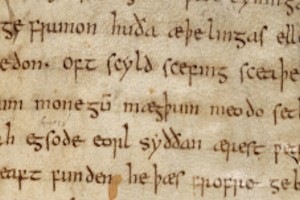 A University of Manchester lecturer has discovered that the famous first line of English language’s oldest epic poem has been misinterpreted, ever since it was popularised almost 200 years ago.

Dr George Walkden, who is a historical linguist, says because translators of the iconic Beowulf have relied on a faulty interpretation of its first word, the meaning of its first sentence must be understood differently.

The poem, in Old English and believed to be written between 1,200 and 1,300 years ago, has captivated poetry lovers ever since it was first published in 1815 by the Scandinavian scholar Grímur Jónsson Thorkelin.

However, according to Dr Walkden in a new paper published this month, the first word hwæt penned by an unknown poet, is not a stand-alone sentence meaning “listen up!” as previously thought.

Dr Walkden says the mistake dates back to Jakob Grimm, of Grimm Brothers fame, who wrote in 1837 that hwæt was a ‘pure interjection’.

“Though we are just talking about one word, the true meaning of this iconic line of poetry now has a biographical feel, giving us a sense of how the writer attaches importance to his community’s history,” said Dr Walkden.

“The whole sentence becomes an exclamation – rather than just the first word.

“But fascinatingly, there’s no record of the Anglo-Saxons using exclamation marks, or any other form of punctuation, besides the full stop (or ‘point’) and the occasional semicolon.”

The academic, based in the University’s School of Arts, Languages and Cultures, looked at 141 instances of hwæt, comparing them to sentences without the word.

He discovered that in clauses beginning with hwæt , the verb is usually at the end – something which had not been observed before.
In the context of Old English word order in general, this means that these clauses are more likely to have been intended as exclamatives, rather than simple assertions.

Beowulf, set in Scandinavia, is commonly cited as one of the most important works of Anglo-Saxon literature.

It is an epic tale of war, monsters and heroism, in an early coming together of Anglo-Saxon and Christian traditions.

Dr Walkden added: “Even Seamus Heaney’s rendering of the first line in 2000, though a substantial achievement, is ultimately misleading.

“Like the others, he had no reason to doubt the accepted scholarship on the meaning of the word, so he translated it – brilliantly – with “So.”. But that translation now has to be rethought.

“Our understanding of Beowulf and its language is hugely important: it tells us where we come from and how much we’ve changed.

“Maybe now future editions may take this into account. After all, the text is regarded as the first line of English poetry in the most important piece of Anglo-Saxon literature ever written.”

The paper ‘The status of hwæt in Old English’ published in English Language and Linguistics is available.