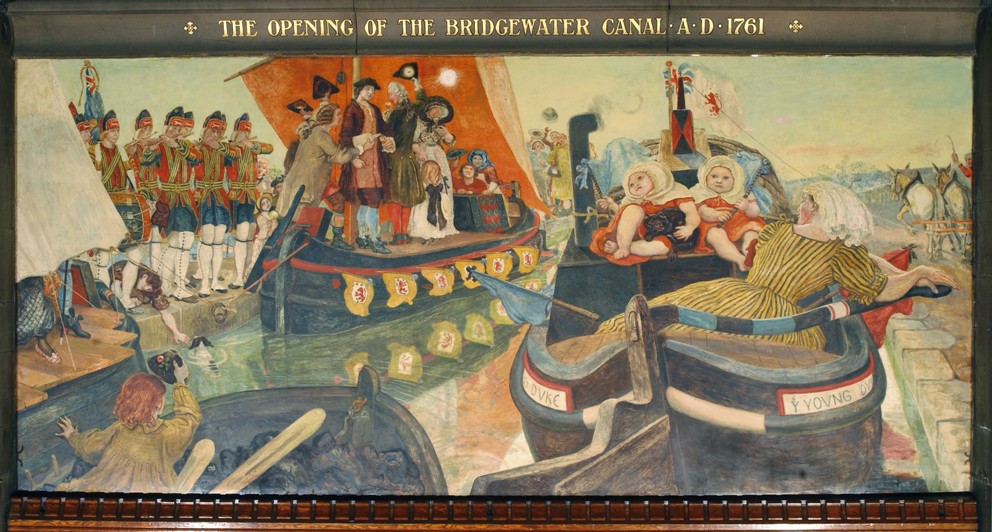 12 stunning murals which reveal a remarkable Victorian vision of Manchester

An Art History expert from The University of Manchester has written the first in-depth account of the story behind the twelve extraordinary murals in Manchester Town Hall, which he says reveal a remarkable Victorian vision of the city.

Ford Madox Brown spent 16 years creating the extraordinary works depicting the creation, development and success of Manchester in the Great Hall from 1878-93, but they were overlooked and semi-forgotten by the art world in the UK until the 1980s in part because academic and popular writers tended to focus on French art.

However, Senior Art History Lecturer Dr Colin Trodd says they are without doubt the most important public art works of their day, and the paintings are now the subject of his new book Ford Madox Brown: The Manchester Murals and the Matter of History.

In the book, he explores the features that define the murals – subject matter, dynamic movement, and unusual combinations of seriousness and comedy. He also explains how Brown used historical and contemporary records to support his vision, as well as examining Brown’s difficult relationships with local politicians and civil servants, and looking at why Brown’s account of the development of Manchester appeals to modern viewers.

During his research, Dr Trodd discovered that Brown was an outspoken critic of industrialists, factory owners, and most local politicians and civil servants, and that he provided financial support for impoverished artists and unemployed workers despite not being wealthy himself.

He also found that Brown overcame personal tragedies at the time he was working on the project - his brilliantly gifted son died just before the commission, his wife became alcohol-dependent during the period he worked on the murals, and he had a stroke when they were almost completed.

Brown was the consummate cosmopolitan, speaking at least three European languages - he believed in the unity of British and European culture. How strange, then, that the result of the 2016 Brexit referendum was announced in front of one of his murals - Chetham\'s Life Dream - which offers a visionary account of society based on cooperative, as opposed to competitive principles.

“His murals transcend traditional models of history painting by focusing on the idea of human vitality. As Brown saw it, history painting should be an exercise in understanding how ordinary people interact with broader social forces and powers. The displays of exuberance in the murals confirm Brown's concern with the idea of human freedom - and what people do when confronted by representatives of the political establishment.”

12 stunning murals which reveal a remarkable Victorian vision of Manchester