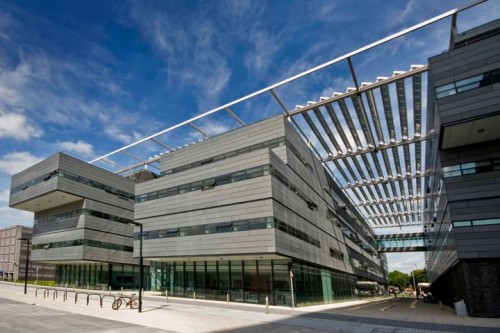 Researchers including a team from The University of Manchester have created a table-top instrument which can perform measurements that were only previously possible using enormous machines at a handful of large laboratories around the world. This means that research into the development of next generation electronic devices employing 2D materials can now be done at just about any research university.

Since the 1950s, experiments conducted with magnetic fields have played a pivotal role in the development of semiconductors devices such as transistors and light-emitting diodes that have changed the world. Previously, scientists have had to visit huge facilities such as the National High Magnetic Field Laboratory in the USA to probe the fundamental structure of materials to better understand and manipulate their properties. However, such facilities are extremely scarce, and scientists must compete with others for valuable time on the machines.

Dr Darren Graham and a team of researchers from the University of Manchester’s Photon Science Institute have collaborated with colleagues from the University of Cambridge and industry partners from Germany to develop the new instrument. The new magnet is compact enough for a table-top machine, yet the magnet can only generate a field in short pulses that each last for a fleeting one hundredth of a second.

The team worked with researchers from manufacturers Laser Quantum to incorporate lasers into the new instrument which are more than 10 times quicker than those found in typical ultrafast laser systems. This allowed them to increase the number of measurements during one magnetic pulse to around 100 - previous experiments with a similar magnet system were limited to 4 measurements per pulse.

“The challenge when using these pulsed magnets is being able to record your data within the brief time period that the magnet is on. The breakthrough we have made is in the measurement technique, which is the leap forward that will now enable routine cyclotron resonance measurements on a table-top in a laboratory environment.”

Ultimately, the team hopes their new instrument could facilitate rapid progress in many areas of semiconductor device development. The system can be easily moved to different universities, and it makes it easy to think of a measurement, and simply perform it the next day, without having to apply for time at a national magnet facility, the researchers say.

“We’re sure that when people realise that we can do such measurements in the lab they will be lining up to use our instrument. We’ve already been contacted by several groups interested in having measurements made on their samples,” Dr Graham said.

The researchers describe their work in this paper in the journal Applied Physics Letters, from AIP Publishing.