Rising risk of obesity among China’s ‘left behind children’ 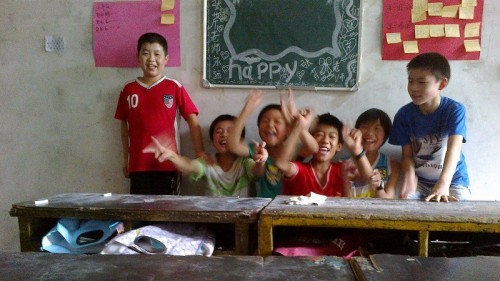 Some 61 million rural children left behind by parents moving to China’s booming urban centres are at risk from increased fat and reduced protein in their diets, research from The University of Manchester, published in Public Health Nutrition suggests.

The study of 975 children from 140 rural villages in nine provinces carefully analysed nutritional intake and showed a particular risk to boys who were left behind in the care of grandparents or one parent while a mother or father sought work away from home.

The research was led by Nan Zhang from the University’s School of Nursing, Midwifery and Social Work. She said: “There are sound financial reasons why so many people move from rural to urban areas in China, but the benefits that more money brings to a family can often be at the expense of child nutrition.

“The Chinese government needs to recognise this growing problem among rural communities and this research provides some evidence to target health policies on encouraging a balanced diet.”

The study found that ‘left behind’ boys in particular consumed more fat and less protein than those from complete families, which leaves them at increased risk of obesity and stunted growth. This finding has important policy implications in a specific cultural context where ‘son preferences’ are powerful.


The Chinese government needs to recognise this growing problem among rural communities and this research provides some evidence to target health policies on encouraging a balanced diet.

Although the findings don’t provide reasons for this change in diet, the researchers speculate that mothers moving away from home generally earn less, and that these lower earnings act in combination with grandparents’ poorer dietary knowledge or willingness to spend more on food.  Another academic paper led by Nan Zhang has explored the intergenerational differences in beliefs about healthy eating for left-behind children among grandparents and parents and was published in Appetite.

Another factor at work could be that prices of protein-based foods such as eggs and meat have increased faster than many households’ incomes – meaning that even though money is being sent home from one or both parents, nutrition doesn’t always improve.

Nan Zhang said: “The process of parental migration is complex and the reasons for problems in boys’ nutrition are not straightforward, however we can see that both parents and grandparents in rural areas need to be educated about good diet.

“Because raising children can fall on all members of the family, good care-giving practice needs to become more widespread.”

The paper, ‘A multi-level analysis of the relationship between parental migration and left-behind children’s macronutrient intakes in rural China,’ was published in the journal, Public Health Nutrition.

Rising risk of obesity among China’s ‘left behind children’