Round up of MUI papers, awards and external engagement, Feb-Mar 2019 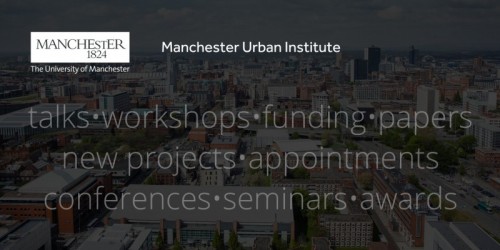 A selection of Manchester Urban Institute papers, talks and external engagement from February and March 2019.

Tanja Bastia has taken up a Leverhulme Fellowship as of 1 February 2019 for 16 months to research ageing and migration in Bolivia.

Dr Henrik Ernstson has been made Honorary Associate Professor at the University of Cape Town's African Centre for Cities, appointed by UCT's Council and Vice-Chancellor, Professor Mamokgethi Phakeng.

The appointment is in recognition of his long contribution to the institution and towards strengthening further international collaborations. It lasts for five years to 2023.

Joe Ravetz has received a grant award under the 'Towards A Sustainable Earth' scheme (£700,000).

The PERI-CENE (Peri-Urbanization & Climate-Environment Change) project is a comprehensive assessment of global peri-urbanisation and its climate impacts, risks and vulnerabilities.

With an interactive Peri-urban Analysis Tool, the project explores synergistic pathways in a Policy Lab with 24 city-regions from around the world, with in-depth case studies in India and UK, and knowledge transfer via ICLEI, UN Habitat and UN Global Compact for Cities.

Stefan Bouzarovski and Saska Petrova have been successful in obtaining funding for the ‘Renewable energies for vulnerable groups’ (POWER-TY) project, led by the Andalusian Energy Agency, and funded by the Interreg Europe programme, via the European Regional Development Fund. The total FEC value for the project at Manchester is £197,000.

Philip Black and Ian Mell have both contributed articles to the latest issue of Town Planning Review.

Diana Mitlin argued that slum dwells may have lived in their communities for 40 years, so they shouldn't be treated as transient places, in this BBC Future article.

Mark Usher has published an article entitled Desali-nation: techno-diplomacy and hydraulic state restructuring through reverse osmosis membranes in Singapore in Transactions of the Institute of British Geographers 44 (1): 110-124.

Stefan Bouzarovski joined the editorial board of the journal ‘Energies’ and took up an editorial assignment for SAGE Open.

All recent papers from MUI researchers can be found via the University's research portal.

Round up of MUI papers, awards and external engagement, Feb-Mar 2019