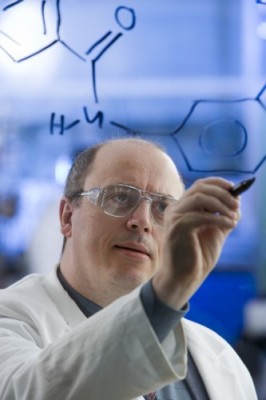 Professor David Leigh of The University of Manchester’s School of Chemistry has been recognised as one of the world’s top scientists, by being awarded with a Royal Society Research Professorship.

Professor Leigh is a leading supramolecular chemist, and a pioneer of synthetic molecular machine systems. His work is directed towards the invention of artificial molecular machines and is at the forefront of small-molecule robotics, an important step towards the goal of a useful working molecular nanotechnology.

Previous holders of Royal Society Research Professorships include seven Nobel Laureates and five Presidents of the Royal Society. The professorships usually run for up to 10 years, and provide long-term support for internationally recognised scientists of exceptional accomplishments from a range of diverse areas including biochemistry, genetics, chemistry, developmental biology and physics.

The title is also currently held by The University of Manchester’s Professor Sir Kostya Novoselov - he is known for his work on graphene with Andre Geim, for which he was awarded the Nobel Prize in physics in 2010.

“The scientists awarded the 2016 Research Professorships are amongst the world’s most distinguished. They have already made outstanding contributions to science and society, and we hope that the professorships will support their current projects, as well as opening up new opportunities to enable them to continue their exceptional work.”

“They have the potential to be cornerstones of revolutionary technologies that will address societal needs in terms of competitiveness, public health, energy, transport and security.”