David Olusoga and Michael Wood, two celebrated professors from The School of Arts, Languages and Cultures and Creative Manchester 'Iconics', have participated in The University of Manchester Lockdown Lectures, sharing their views about Coronavirus, history, society and the inspiration to their studies and careers. 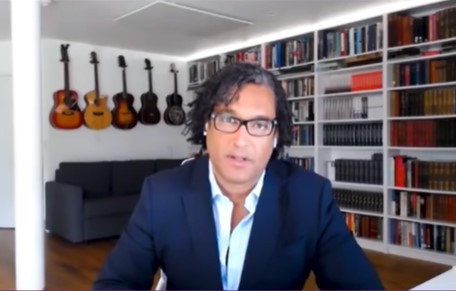 David Olusoga, historian, film-maker and broadcaster is well-known for producing and presenting recognised and popular TV series including Black and British: A Forgotten History, The World’s War, A House Through Time and the BAFTA award-winning Britain’s Forgotten Slave Owners.

David’s main subject areas are empire, race and slavery, and in his lockdown lecture he talked about what inspired him to study history, how he began to realise that learning history was ‘the key to understanding the story of me and my family and background,’ his ‘most inspirational teacher of all time,’ Michael Wood, and other steps that led him to become a broadcaster and film-maker.

He spoke about the challenges that existed and continue to exist within his role and society, ‘the dilemma of being from a BAME background and studying race, slavery and empire, the dilemma of being pigeon-holed, of being corralled into only studying aspects of history that relate to race or the black experience.’

Michael Wood was the final lecture in the Lockdown Lecture series.

Michael has been a renowned face on our screens for over 30 years. He has produced and presented well-known and popular programmes including ‘The Story of India’, ‘Great British Story’ and most recently ‘The Story of China’.

Michael has a depth of knowledge surrounding Chinese culture and in his lecture he speaks about what inspired him to study China and his earliest memory of becoming hooked to the Chinese culture. As a teenager, he picked up a Chinese Poetry Book which included the poem ‘The Autumn Wastes’ by Chinese poet ‘Du Fu’. This was the poem that altered Michael’s viewpoint forever. He states, ‘it was as if a window had been opened on a world I’d never dreamed existed.’

Michael talks about the University’s and Manchester’s established links with China and the devastating impact that Covid-19 could have, financially and culturally on both the University and Manchester as a city. He speaks about the counter productiveness of the dehumanisation of China and ends with sharing his views on common humanity, that it is ‘the most important thing for us all to hold onto in this very difficult time.’

Following the lectures were Q&A interviews, conducted by Megan Ritchie, a third-year Politics and International Relations student at Manchester. You can watch the lectures and Q&A’s by following links below.