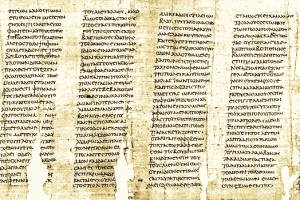 A science historian at The University of Manchester has cracked “The Plato Code” – the long disputed secret messages hidden in the great philosopher’s writings.

Plato was the Einstein of Greece’s Golden Age and his work founded Western culture and science. Dr Jay Kennedy’s findings are set to revolutionise the history of the origins of Western thought.

Dr Kennedy, whose findings are published in the leading US journal Apeiron, reveals that Plato used a regular pattern of symbols, inherited from the ancient followers of Pythagoras, to give his books a musical structure. A century earlier, Pythagoras had declared that the planets and stars made an inaudible music, a ‘harmony of the spheres’. Plato imitated this hidden music in his books.

The hidden codes show that Plato anticipated the Scientific Revolution 2,000 years before Isaac Newton, discovering its most important idea – the book of nature is written in the language of mathematics. The decoded messages also open up a surprising way to unite science and religion. The awe and beauty we feel in nature, Plato says, shows that it is divine; discovering the scientific order of nature is getting closer to God. This could transform today’s culture wars between science and religion.

“Plato’s books played a major role in founding Western culture but they are mysterious and end in riddles,” Dr Kennedy, at Manchester’s Faculty of Life Sciences explains.

“In antiquity, many of his followers said the books contained hidden layers of meaning and secret codes, but this was rejected by modern scholars.

“It is a long and exciting story, but basically I cracked the code. I have shown rigorously that the books do contain codes and symbols and that unraveling them reveals the hidden philosophy of Plato.

“This is a true discovery, not simply reinterpretation.”

This will transform the early history of Western thought, and especially the histories of ancient science, mathematics, music, and philosophy.

Dr Kennedy spent five years studying Plato’s writing and found that in his best-known work the Republic he placed clusters of words related to music after each twelfth of the text – at one-twelfth, two-twelfths, etc. This regular pattern represented the twelve notes of a Greek musical scale. Some notes were harmonic, others dissonant. At the locations of the harmonic notes he described sounds associated with love or laughter, while the locations of dissonant notes were marked with screeching sounds or war or death. This musical code was key to cracking Plato’s entire symbolic system.

Dr Kennedy, a researcher in the Centre for the History of Science, Technology and Medicine, says: “As we read his books, our emotions follow the ups and downs of a musical scale. Plato plays his readers like musical instruments.”

However Plato did not design his secret patterns purely for pleasure – it was for his own safety. Plato's ideas were a dangerous threat to Greek religion. He said that mathematical laws and not the gods controlled the universe. Plato's own teacher had been executed for heresy. Secrecy was normal in ancient times, especially for esoteric and religious knowledge, but for Plato it was a matter of life and death. Encoding his ideas in secret patterns was the only way to be safe.

Plato led a dramatic and fascinating life. Born four centuries before Christ, when Sparta defeated plague-ravaged Athens, he wrote 30 books and founded the world’s first university, called the Academy. He was a feminist, allowing women to study at the Academy, the first great defender of romantic love (as opposed to marriages arranged for political or financial reasons) and defended homosexuality in his books. In addition, he was captured by pirates and sold into slavery before being ransomed by friends.

Dr Kennedy explains: “Plato’s importance cannot be overstated. He shifted humanity from a warrior society to a wisdom society. Today our heroes are Einstein and Shakespeare – and not knights in shining armour – because of him.”

Over the years Dr Kennedy carefully peeled back layer after symbolic layer, sharing each step in lectures in Manchester and with experts in the UK and US.

He recalls: “There was no Rosetta Stone. To announce a result like this I needed rigorous, independent proofs based on crystal-clear evidence.

“The result was amazing – it was like opening a tomb and finding new set of gospels written by Jesus Christ himself.

“Plato is smiling. He sent us a time capsule.”

Dr Kennedy’s findings are not only surprising and important; they overthrow conventional wisdom on Plato. Modern historians have always denied that there were codes; now Dr Kennedy has proved otherwise.

He adds: “This is the beginning of something big. It will take a generation to work out the implications. All 2,000 pages contain undetected symbols.”

The paper ‘Plato’s forms, Pythagorean Mathematics, and Stichometry’ is available.

“Be kind, for everyone you meet is fighting a hard battle.”

“If women are expected to do the same work as men, we must teach them the same things.”

“Ignorance: the root of all evil.”

“Only the dead have seen the end of war.”

“The price good men pay for indifference to public affairs is to be ruled by evil men.”

Dr Jay Kennedy has degrees from Princeton and Stanford. He worked at the University of Notre Dame and Cambridge University before moving to the Centre for the History of Science, Technology, and Medicine at the University of Manchester. Before becoming a teacher, he worked on the oil rigs in the Gulf of Mexico, in Tokyo as a translator, and in Baghdad at the National Computer Centre.

For more information, a copy of the paper or an interview with Dr Jay Kennedy, contact Media Relations Officer Mikaela Sitford on 0161 275 2111, 07768 980942 or Mikaela.Sitford@manchester.ac.uk. Also visit http://personalpages.manchester.ac.uk/staff/jay.kennedy/