Scientific pioneers honoured by The University of Manchester
Newsroom

Scientific pioneers honoured by The University of Manchester 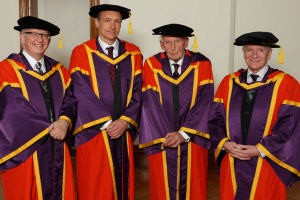 Two world-famous scientific pioneers, an international composer and a philanthropist have been honoured by The University of Manchester.

The quartet were presented with their accolades by newly installed Chancellor and alumnus Tom Bloxham, co-founder of property company Urban Splash.

Oxford graduate Professor Berners-Lee is credited with inventing the World Wide Web in 1989 while at CERN, the European Particle Physics Laboratory.

He holds the position of the Director of the World Wide Web Consortium, as well as holding Chairs at the Massachusetts Institute of Technology (MIT) and The University of Southampton.

In 2004 he was knighted by HM Queen Elizabeth and in 2007 he was awarded the Order of Merit.

Both of Sir Tim’s parents worked on the Manchester Mark 1 – the offspring of the famous Baby computer, which was first demonstrated at The University of Manchester in June 1948.

Sir Bernard led the team that developed H2S radar during WWII, before returning to the University in 1945.

After moving to the University’s little-known botanical station at Jodrell Bank to continue his research into cosmic rays, away from the interference of the city, he set about constructing the iconic Lovell radio telescope – now a world-famous and iconic landmark.

In 1957, when the Soviet Union launched the first space satellite, Sputnik I, it was the only telescope in the world able to track the satellite's carrier rocket by radar. Since then, it has been used to do pioneering work in the discovery of pulsars and quasars and to prove that Einstein's theory of general relativity is correct to within 0.05 per cent.

He was one of the first scientists to visit the Soviet Union during the Cold War, and helped to begin a thaw in relations that led to strong cooperation in radio astronomy.

Sir Bernard served as Director of Jodrell Bank until his retirement in 1981. He was knighted in 1961 for his pioneering work in radio astronomy. He lives just a few miles from Jodrell Bank, and still has an office at the site, which he visits regularly.

Speaking about the honour, Sir Bernard said: “I’m very honoured. I have caused them so much trouble in the past.

“When I applied for funding in the 1950s for Jodrell Bank, the government said they would expect and hope that I would remain at post in Jodrell for the duration of the project and see it through. They had so many cases of people starting on projects, particularly large scale nuclear ones, and then leaving shortly afterwards.

“I think I have stayed long enough to meet this requirement. It is thanks to the University’s vision that there is no place like Jodrell in the world. People from other universities just travelled to the telescopes they needed to use – but here the observatory is synonymous with the university.”

Born in 1945, Edward Gregson is a composer of international standing, whose music has been performed, broadcast, and commercially recorded worldwide. He studied composition (with Alan Bush) and piano at the Royal Academy of Music from 1963 - 1967 winning five prizes for composition. Since then he has worked solely to commission and has written orchestral, chamber, instrumental and choral music as well as music for the theatre, film and television.

His commissions have included orchestral music for the Royal Liverpool Philharmonic, the BBC Philharmonic (Clarinet Concerto) and the Hallé (Violin Concerto), with performances by many other orchestras and ensembles around the world.

He retired from an academic career in music in the summer of 2008, latterly as Principal of the Royal Northern College of Music in Manchester, a post he held for 12 years. He still serves on a number of important boards relating to music education and the music profession and holds numerous honorary Doctorates and Fellowships from English universities and conservatoires.

Philanthropist Eddie Davies is involved in a number of businesses throughout the world, having been Chairman of leading manufacturing company Strix. He is the owner of Bolton Wanderers Football Club and has strong links with the University.