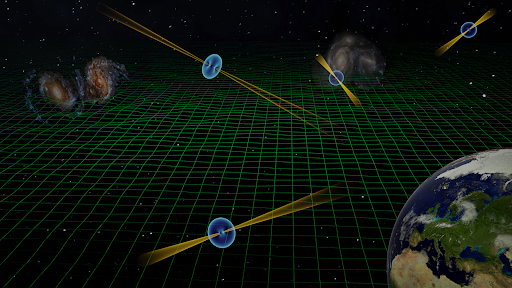 The European Pulsar Timing Array (EPTA) is a scientific collaboration bringing together teams of astronomers around the largest European radio telescopes, as well as groups specialized in data analysis and modelling of gravitational wave (GW) signals.

The international research team has today published in, Monthly Notices of the Royal Astronomical Society, a detailed analysis of a candidate signal for the since-long sought gravitational wave background (GWB) due to in-spiralling supermassive black-hole binaries. Although a detection cannot be claimed yet, this represents another significant step in the effort to finally unveil GWs at very low frequencies, of order one billionth of a Hertz.

In fact, the candidate signal has emerged from an unprecedented detailed analysis and using two independent methodologies. Moreover, the signal shares strong similarities with those found from the analyses of other teams.

Dr Michael Keith of The University of Manchester, said: “For the last 20 years or so we have been trying to detect the gravitational waves produced by super-massive black holes in the centres of distant galaxies. Although these waves are very tiny - nanosecond fluctuations over tens of years, the detection of these waves has implications for the formation of all galaxies, including our own Milky Way.

“So far nobody has detected these waves, but we have found an intriguing signal in the data that matches some, but not all, of the properties of the gravitational wave signal we are looking for. The paper presents the data and some of the extensive range of tests we have done to support the hypothesis that the observed signal is from ultra-low frequency gravitational waves passing over the earth.”

The results were made possible thanks to the data collected over 24 years with five large-aperture radio telescopes in Europe. They include; the world-renowned Lovell Telescope at The University of Manchester’s Jodrell Bank, MPIfR’s 100-m Radio Telescope near Effelsberg in Germany, the 94-m Nançay Decimetric Radio Telescope in France, the 64-m Sardinia Radio Telescope at Pranu Sanguni, Italy and the 16 antennas of the Westerbork Synthesis Radio Telescope in the Netherlands. In the observing mode of the Large European Array for Pulsars (LEAP), the EPTA telescopes are tied together to synthesize a fully steerable 200-m dish to greatly enhance the sensitivity of the EPTA towards gravitational waves.

For the last 20 years or so we have been trying to detect the gravitational waves produced by super-massive black holes in the centres of distant galaxies. Although these waves are very tiny - nanosecond fluctuations over tens of years, the detection of these waves has implications for the formation of all galaxies, including our own Milky Way.

Radiation beams from the pulsars’ magnetic poles circle around their rotational axes, and we observe them as pulses when they pass our line of sight, like the light of a distant lighthouse. Pulsar timing arrays (PTAs) are networks of very stably rotating pulsars, used as galactic-scale GW detectors. In particular, they are sensitive to very low frequency GWs in the billionth-of-a-Hertz regime. This will extend the GW observing window from the high frequencies (hundreds of Hertz) currently observed by the ground-based detectors LIGO/Virgo/KAGRA.

While those detectors probe short lasting collisions of stellar-mass black holes and neutron stars, PTAs can probe GWs such as those emitted by systems of slowly in-spiraling supermassive black-hole binaries hosted at the centres of galaxies. The addition of the GWs released from a cosmic population of these binaries forms a GWB.

The small fluctuations in the arrival times of the pulsars’ radio signal at Earth can be measured, caused by the spacetime deformation due to a passing-by very low frequency gravitational waves. In practice, these deformations manifest as sources of a very low frequency noise in the series of the observed times of arrival of the pulses, a noise which is shared by all the pulsars of a pulsar timing array.

However, the amplitude of this noise is incredibly tiny (estimated to be tens to a couple hundreds of a billionth of a second) and in principle many other effects could impart that to any given pulsar in the PTA.

To validate the results, multiple independent codes with different statistical frameworks were then used to mitigate alternate sources of noise and search for the GWB. Importantly, two independent end-to-end procedures were used in the analysis for cross-consistency. Additionally, three independent methods were used to account for possible systematics in the Solar-system planetary parameters used in the models predicting the pulse arrival times, a prime candidate for false-positive GW signals.

The EPTA analysis with both procedures found a clear candidate signal for a GWB and its spectral properties (i.e. how the amplitude of the observed noise varies with its frequency) remain within theoretical expectations for the noise attributable to a GWB.

Dr. Nicolas Caballero, researcher at the Kavli Institute for Astronomy and Astrophysics in Beijing and co-lead author explains: “The EPTA first found indications for this signal in their previously published data set in 2015, but as the results had larger statistical uncertainties, they were only strictly discussed as upper limits. Our new data now clearly confirm the presence of this signal, making it a candidate for a GWB".

The paper, Common-red-signal analysis with 24-yr high-precision timing of the European Pulsar Timing Array: inferences in the stochastic gravitational-wave background search, is published in Monthly Notices of the Royal Astronomical Society.