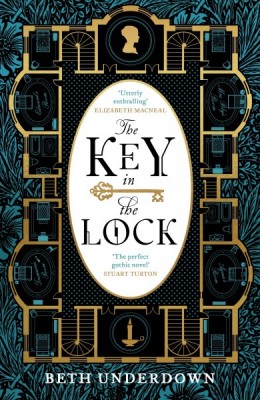 Award-winning author and Centre for New Writing lecturer Beth Underdown launches her latest novel The Key in the Lock at Blackwell’s Manchester in January 2022.

Listed as one to watch in The Observer‘s New Faces of Fiction 2017 feature, Beth Underdown was born in Rochdale in 1987. She studied at the University of York and then The University of Manchester, where she is now a Lecturer in Creative Writing.

Beth Underdown's new gothic thriller, The Key in the Lock is a captivating story of burning secrets and buried shame, and of the loyalty and love that rises from the ashes.

Described by Elizabeth Macneal, author of Circus of Wonders, as “'Dark, clever and Utterly enthralling”, The Key in the Lock is a gothic mystery full of grief, love and long-buried secrets.

The Witchfinder’s Sister, her debut novel, which was published by Viking in the UK and Ballantine in the US in 2017, was a Richard and Judy bestseller and won the HWA Goldsboro Crown Debut Award.

Beth will be in conversation with writer Kate Feld at the launch event, will read from her latest novel and will be signing copies of The Key in the Lock afterwards.