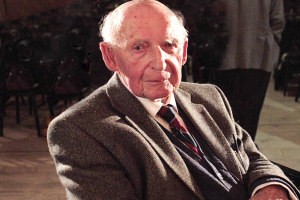 It is with great regret that we announce that Sir Bernard Lovell OBE FRS died yesterday 6 August 2012 at the age of 98.

Sir Bernard, Emeritus Professor of Radioastronomy, was the founder and first Director of The University of Manchester’s Jodrell Bank Observatory in Cheshire.

Born in 1913 in Oldland Common, Gloucestershire, Sir Bernard studied at the University of Bristol before coming to Manchester to work in the Department of Physics in 1936. During the Second World War, Sir Bernard led the team that developed H2S radar, work for which he was later awarded the OBE.

Sir Bernard returned to the Manchester Physics Department in 1945 and began work on cosmic rays using ex-military radar equipment. He brought this equipment to a University botany site at Jodrell Bank in late 1945, founding the world-famous Observatory which now exists here.

Jodrell Bank is dominated by the 76-metre Lovell Telescope, conceived by Sir Bernard. He worked with engineer Sir Charles Husband to build the telescope which has become an icon of British science and engineering and a landmark in the Cheshire countryside.

A hugely ambitious project, the telescope was by far the world's largest when it was completed in 1957 and within days tracked the rocket that carried Sputnik 1 into orbit, marking the dawn of the space age. It is still the third largest steerable telescope in the world and a series of upgrades mean it is now more capable than ever, observing phenomena undreamt of when it was first conceived.

Today the Lovell Telescope plays a key role in world-leading research on pulsars, testing our understanding of extreme physics including Einstein’s General Theory of Relativity.

In 2011 Jodrell Bank Observatory was placed on the UK government’s shortlist for World Heritage Site status, recognising its unique role in the development of our understanding of the universe.

The Observatory continues to play a key role in astronomical research. It is now home to the e-MERLIN array of seven radio telescopes spread across the UK.

Based on the techniques of linking telescopes over long distances pioneered by the team which Sir Bernard assembled at Jodrell Bank, the network is now connected by a high-speed optical fibre network making it one of the most powerful telescope arrays in the world.

Later this year the international headquarters of the SKA Organisation will move to Jodrell Bank. The Square Kilometre Array (SKA) will be the world’s largest telescope. Combining thousands of dishes and other receivers spread across thousands of kilometres, the SKA itself will be sited in Africa and Australia.

Over the last seven decades, many hundreds of scientists and engineers have worked and trained at Jodrell Bank, often going on to work at other observatories across the world. Jodrell Bank has also inspired generations of schoolchildren who have visited the Observatory to pursue careers in science, engineering and medicine.

In person, Sir Bernard was warm and generous. He is survived by four of his five children, 14 grandchildren and 14 great-grandchildren. He retained a keen interest in the development of science at Jodrell Bank and beyond. Indeed he continued to come in to work at the Observatory until quite recently when ill health intervened. Outside the world of science he was an accomplished musician, playing the organ at the Swettenham Church for many years. He was also a keen cricketer, captain of the Chelford Cricket Club and past President of the Lancashire County Cricket Club. He was also renowned internationally for his passion for arboriculture, creating arboretums at both The Quinta and Jodrell Bank itself.

Sir Bernard’s legacy is immense, extending from his wartime work to his pioneering contributions to radio astronomy and including his dedication to education and public engagement with scientific research. A great man, he will be sorely missed.

A book of condolence will be opened at the Jodrell Bank Discovery Centre on 7 August, and an online version is now also be available.

Funeral arrangements will be announced later.

President and Vice-Chancellor of The University of Manchester, Professor Dame Nancy Rothwell, said: "We are all greatly saddened by Sir Bernard's death. He was a towering figure, not just in Manchester or the UK, but globally. Sir Bernard leaves a fantastic legacy at the University's Jodrell Bank Observatory which is a world class centre for astronomy research, an iconic science monument and a centre that attracts thousands of visitors and inspires scientists of the future."