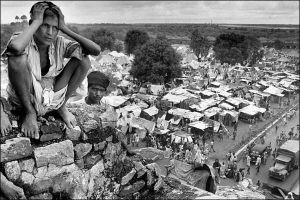 Smartphones could help save hundreds of thousands of lives in the aftermath of a disaster or humanitarian crisis, research from University of Manchester academics has found.

Software developed by computer scientists could help to quickly and accurately locate missing people, rapidly identify those suffering from malnutrition and effectively point people towards safe zones simply by checking their phones.

It is hoped the smartphone technology could potentially not only help save lives but could also ease the financial and emotional burden on aid organisations.

The largest system developed by Dr Gavin Brown and his team Peter Sutton and Lloyd Henning in the Machine Learning and Optimisation group at The University of Manchester is the REUNITE mobile and web platform.

In the aftermath of a major disaster, aid workers typically interview people who have become separated from their families. These records are normally stored in paper form, which can be lost, damaged or illegible.

Although there are systems set up to solve this issue – such as the public search facilities set up by charities such as the Red Cross – there is no universal system to provide this vital task.


REUNITE records the initial interview using the smartphone, and uploads these onto a central server. These can then be accessed by trusted aid workers via computer away from the scene, who gather as much information as they can by liaising with other users in a similar manner to a social network, before passing details onto aid workers on the ground.

The interviews would be quickly transcribed into a web-searchable format which could be downloaded by relief workers on the ground, which can then relay the massage to survivors.

The unlimited amount of web users, called a ‘crowd’, would be a trusted network of individuals who access the information via an encrypted uplink – which would address any issues of confidentiality.

As part of the same research, Dr Brown has also created software called ‘Where’s Safe’, which quickly identifies safe areas for people to go to in the event of a natural disaster or terrorist attack.

Designed to replace the emergency radio broadcast system, which does not reach a large amount of people, the software allows people to find their nearest safe point simply by sending an SMS message.

Dr Brown’s third software solution is HeightCatcher – an innovative tool which can quickly calculate infants who are suffering from malnutrition and work out what quantity of fluids they need.

Levels of malnutrition are measured by Body Mass Index (BMI), which is calculated by a person’s age, height and weight. The information is entered on a smartphone, which instantly calculates what food or fluids the child needs.

Dr Brown hopes the inventions could be of huge significance to victims of disaster as well as aid workers.

He said: “Our results have demonstrated that mobile intelligent systems can be deployed in low-power, high-risk environments, to the benefit of all involved.

“We believe the refugee aid community will be a strong beneficiary of such technology over the next few years."

Videos and more information are available from http://mlo.cs.man.ac.uk/reunite/

Images of the REUNITE, Where’s Safe and HeightCatcher software devices are available from the Press Office.

Dr Brown is available for interview on request.