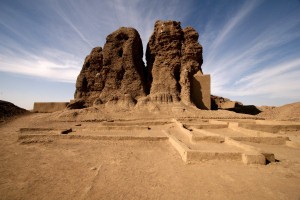 Researchers have solved the riddle of how one of Africa’s greatest civilisations survived a catastrophic drought which wiped out other famous dynasties.

Geomorphologists and dating specialists from The Universities of Aberystwyth, Manchester, and Adelaide say that it was the River Nile which made life viable for the renowned Kerma kingdom, in what is now northern Sudan.

Kerma was the first Bronze Age kingdom in Africa outside Egypt.

Their analysis of three ancient river channels where the Nile once flowed shows, for the first time, that its floods weren’t too low or too high to sustain life between 2,500 BC and 1,500 BC, when Kerma flourished and was a major rival to its more famous neighbour downstream.

They also show that the thousand year civilisation came to end when the Nile’s flood levels were not high enough and a major channel system dried out - though an invasion by resurgent Egyptians was the final cause of Kerma’s demise.

Downstream in Egypt, a catastrophic 30 year drought 4,200 years ago, which produced low Nile floods, created chaos in the old kingdom for at least a century.

Other civilisations in the near east and Mesopotamia were also severely hit by this drought.

The team’s findings, funded by the Sudan Archaeological Research Society (SARS) and the Australian Research Council, are published in the journal ‘Geology’.

Professor Mark Macklin from The University of Aberystwyth said: “This work is the most comprehensive and robustly dated archaeological and palaeoenvironmental dataset yet compiled for the desert Nile.

“The relationship between climate change and the development of Old World riverine civilizations  is poorly understood because inadequate dating control has hindered effective integration of archaeological, fluvial, and climate records.”

Professor Jamie Woodward from The University of Manchester said: “In Nubia four thousand years ago the Kerma people farmed what we might call the Goldilocks Nile: its floods were just large enough to support floodwater farming, but not so big as to cause damage to the riverside settlements.”

“It’s quite remarkable that the Kerma civilization was able to flourish, produce amazing craftsmanship and wealth, at a time when their Egyptian rivals to the North were struggling with environmental, social, and political strife.

“Until now we didn't understand why that was - but thanks to our field work in Sudan, this riddle has now been solved.”

The team used cutting edge geological dating methods to analyse the dried up channels; now 20 km from the today’s river course. It is the first time individual flood events on the desert Nile have been dated.

Using hundreds of deep irrigation pits dug by modern Sudanese farmers, Macklin and Woodward were able to observe the geological history of the old channels. In places, these old channel belts are well preserved at the modern land surface. They are between 1 and 3 km wide with Kerma sites on their margins.

According to Derek Welsby from the British Museum who led the archaeological survey, Kerma’s wealth and power may have been underpinned by its agriculturally-rich hinterland utilising the banks of the ancient channels.

Archaeological surveys of the floodplain in the Dongola Reach to the south of Kerma have discovered more than 450 sites spanning the Neolithic (pre–3500 B.C.) to the Medieval Christian period (A.D. 500–1500). Many sites are associated with the Nile’s ancient channels.

He said: “Kerma’s success was also down to their reliance on animal husbandry practices that are less susceptible to changes in flood level, more mobile, and better able to cope with environmental stress.

“They were a truly remarkable civilisation, producing some of the most exquisite pottery in the Nile Valley.”

This  pioneering work on human settlement history and the channels of the desert Nile in northern Sudan is featured in the new Ancient Worlds Galleries at the Manchester Museum.

The paper, Reach-scale river dynamics moderate the impact of rapid Holocene climate change on floodwater farming in the desert Nile, published in Geology is available