Spotlight on: The British Pop Archive

Professor Hannah Barker, the Director of the John Rylands Research Institute and Library, shares her thoughts on the British Pop Archive and her expectations around the exciting opportunities it presents. 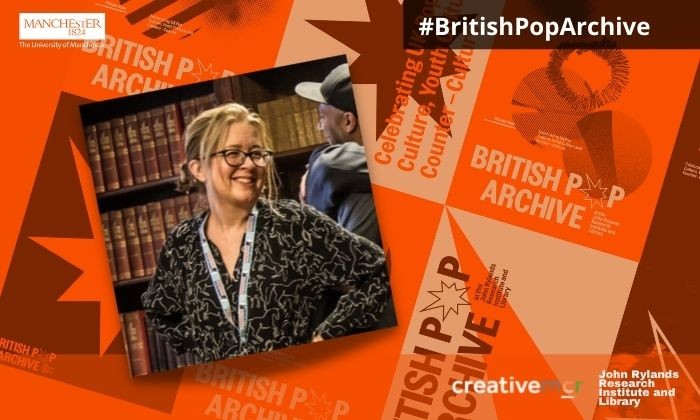 Q: How would you describe the British Pop Archive?

HB: The British Pop Archive (BPA) at the John Rylands Research Institute and Library is the first specifically designated popular culture archive in the UK. The BPA celebrates popular culture, youth culture and counterculture from the 20th century to the present day by locating and preserving records and artefacts of popular culture and making them accessible to the general public, students and researchers.

Among the BPA collections showcased at our May 2022 launch are personal artefacts and materials relating to the heyday of the Manchester music scene: The Smiths, Joy Division, New Order, The Haçienda, Factory Records, and the complete archive of Joy Division singer and lyricist Ian Curtis, part of which will be on public display for the first time. The BPA also holds the archive of Granada TV – a groundbreaking broadcasting company that influenced programme-making throughout the UK from the 1950s to the 1990s, producing TV that tapped into the lives of ordinary people, most famously Coronation Street, alongside major current affairs shows such as World in Action.

Working with the newly-appointed Professor of Popular Culture at The University of Manchester, music journalist, and broadcaster Jon Savage, we have ambitious plans to represent the breadth and range of over a century of British popular culture. The BPA actively collects archival materials in any format related to popular culture in all regions of the UK: from the business records of managers and TV companies, to the personal papers of iconic artists and photographers, to the recorded experiences of audiences and fans. The collection will launch with a distinctively Manchester-flavoured exhibition to celebrate the city’s distinctive contribution to popular culture. As the collection grows, The Rylands will collect materials from across the UK to add to existing archives already located here, such as the Delia Derbyshire Archive (electronic composer at BBC Radiophonic Workshop and composer of the Doctor Who theme tune), and the archives of a key player in the 1960s counterculture, Jeff Nuttall.

Q: What significance does the British Pop Archive have both to Manchester and the UK as a whole?

HB: The vibrant cultural scene of post-war Britain and the birth of mass, democratic culture is a global symbol of innovation, creativity and social progress. These cultural outputs, rooted particularly within music, TV and the arts, are one of our most successful global exports. Manchester has always been at the forefront of cultural and creative innovation, which makes it the perfect setting to host the British Pop Archive – a collection that preserves and tells the stories of popular culture on a national scale.

HB: By locating and preserving the records and artefacts of popular culture we are helping to document a major British success story: British culture and its creative industries. The BPA will feed directly into both research and teaching at The University of Manchester, where we have established strengths in the history of popular culture and modern creative industries through the Creative Manchester platform, including in subject areas such as Music, Drama, History, Sociology, English and Film and TV Studies.

Q: Why is the return of the Granada TV Archive to Manchester so important?

HB: Granada TV has a significant place in British television history. Once described as the ‘greatest television company in the world’, it was founded by Sidney Bernstein in 1954 and began broadcasting to the North in May 1956, when independent television was born.

The return of the Granada archive to Manchester is a major event. Granada TV still holds a powerful place in the cultural memory of the north of England, and the UK as a whole, because it produced programmes for ordinary people and reflected their lives in programmes such as Coronation Street and a stream of local documentaries and other regional programming. The path-breaking documentary series, World in Action also championed key issues of racial injustice from the 1960s and ‘70s and ran the first Hindu and Urdu language series on UK TV, in the ‘80s and ‘90s.

You can learn more about the British Pop Archive, here.