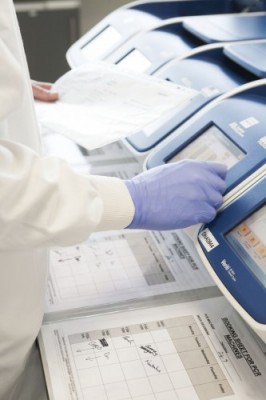 Scientists in Manchester, who have developed a stem cell gene therapy to reverse a fatal childhood illness, have agreed to work with a new therapeutics company to test it in a human trial.

University of Manchester and Central Manchester University Hospital NHS Foundation Trust (CMFT) researchers have developed the pioneering approach for Sanfilippo disease (also known as mucopolysaccharidosis type III or MPS III) – a genetic condition for which there is currently no effective treatment.

The most common of the four types of Sanfilippo (type A) affects around 100 children in the UK, or one in 89,000 births, and it is this type that is targeted by the new treatment.

Sanfilippo is caused by a lack of the SGSH enzyme, which helps to break down and recycle long chain sugars. This results in a build-up of sugars in the body and particularly the brain.

Children with Sanfilippo begin showing symptoms of hyperactivity, severe behavioural problems and miss developmental milestones as toddlers. As they get older they show symptoms similar to dementia, and most never achieve a mental age beyond two years. Later they will experience seizures and difficulties in walking and swallowing. It is invariably fatal, with most children dying around the age of 18 years.

If we can show that it is possible to treat single gene brain diseases, such as Sanfilippo, with stem cell gene therapy, this will pave the way for treating other lysosomal storage and neuro-metabolic disorders

Dr Brian Bigger, who leads the Stem Cell and Neurotherapies Laboratory at The University of Manchester and developed the technique in partnership with the Trust scientists, said: “This license agreement with Orchard will allow us to take the technique we have developed to the next and crucial stage of trials in humans. We are hopeful that this treatment may help to treat the early onset dementia in these patients and saving children’s lives.

“If we can show that it is possible to treat single gene brain diseases, such as Sanfilippo, with stem cell gene therapy, this will pave the way for treating other lysosomal storage and neuro-metabolic disorders.”

The treatment works by genetically correcting the patients’ own stem cells and implanting them into bone marrow to release the missing enzyme in a way that reaches the brain, thereby correcting the condition.

“There are currently no effective treatments available to children affected by Sanfilippo disease. We hope that this work will help to halt the progression of this devastating condition,” added Dr Simon Jones, Consultant in Paediatric Inherited Metabolic Disease at Saint Mary’s Hospital and the Manchester Centre for Genomic Medicine.

Professor Robert Wynn, Consultant Paediatric Haematologist at Royal Manchester Children’s Hospital and chief investigator for the clinical study explained: “This new clinical study aims to explore whether we can use stem cell gene therapy to produce blood cells that express corrected versions of the missing enzyme.

"We know that in conditions similar to Sanfilippo blood cells from a bone marrow donor can deliver such enzymes effectively. This new gene therapy builds on the decades of experience of CMFT physicians in bone marrow transplantation of children with these other metabolic diseases.”

Earlier attempts to cure the illness with a bone marrow transplant were unsuccessful as not enough enzyme was produced to have an effect, but the Manchester team has developed a way of overproducing the SGSH enzyme specifically in bone marrow white blood cells.

This was achieved by developing a lentiviral vector – a tool commonly used by molecular biologists to deliver genetic material into cells – specifically for use in humans, which will be tested in the trial. The lentiviral vector delivers the SGSH gene to bone marrow cells, which, when implanted into the body are able to traffic to both the bone marrow and the brain and deliver SGSH enzyme throughout the body, thus correcting the disease.

Recently a related illness metachromatic leukodystrophy has been treated by Italian scientists using a similar approach, with extremely promising results in patients.

The Manchester team used a similar lentiviral vector to the Italian team, but improved the design to make it more specific to the white blood cells that traffic into and engraft in the brain after a bone marrow transplant (monocytes/microglia). This improves brain targeting and effectiveness.

“Stem cell gene therapy has shown promising effects in several different diseases and we are hopeful that this technology will change the lives of children with Sanfilippo type A and other monogenic bone marrow disorders in the near future.”

Life Sciences Minister, George Freeman MP, said: “This pioneering trial, led by UK researchers in partnership with a UK company, underlines exactly why we invest £1 billion each year through the National Institute for Health Research.

“This new gene therapy has the potential to change the lives of children with this dreadful condition, and will undoubtedly help to cement the UK’s position as a world-leader in medical research.”