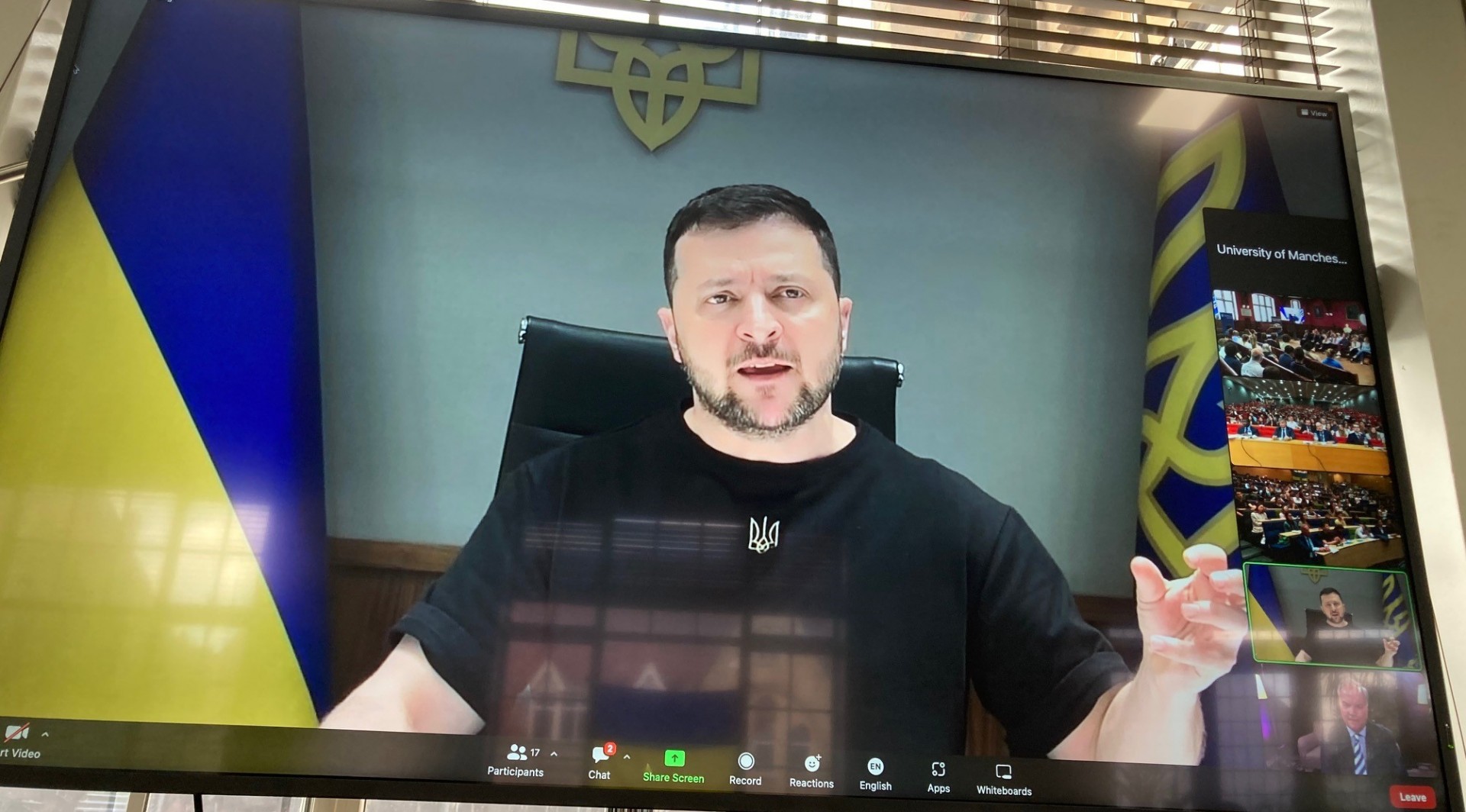 Students from The University of Manchester have been able to pose questions directly to Ukrainian President Volodymyr Zelenskyy in a live question and answer session.

There was such high demand for tickets for the event - which was coordinated and co-sponsored by the MOBILISE project, and moderated by Professor Dimitris Papadimitriou of the Manchester Jean Monnet Centre of Excellence and the University’s Ukrainian Society - that a large queue soon formed outside the venue in Manchester Museum, and a second location was secured at short notice to broadcast the session in University Place.

In a wide-ranging session, Zelenskyy said that Russia wanted to wipe out Ukraine by denying its right to exist and eradicate its history. He also said that Putin is afraid of free nations, but that his autocratic model of governance belongs to the past whereas Ukraine’s belongs to the future.

The President pledged to the students that he would not give up or concede territory to Russia, and urged Ukrainian students to use their skills to help rebuild his country - he told them that they are ambassadors for the country, and that he needs them to build a "comfortable state” after the war has ended. He also said public support from people and institutions in other nations is vital to Ukraine.

He set out plans which will allow its allies to directly sponsor the rebuilding of entire cities and sectors of the economy, and mentioned that cities and countries had already linked with their Ukrainian counterparts to start planning the reconstruction.

He used part of the session to thank the United Kingdom, saying that we had been the “leader and driver” of the supply of weapons for the Ukrainian army, and thanked Prime Minister Boris Johnson and Foreign Secretary Liz Truss for their support. He said that when Ukraine wins the war, they will share the victory with us.

When asked about Sweden and Finland joining NATO, he said it was a very wise choice that will help the countries to defend their people in case of Russian aggression – but he added that if Ukraine had been able to join, it “would have saved a lot of lives”.

“We were delighted to have co-hosted the Ukrainian President here in Manchester, and the reaction from our students was amazing,” said Professor Papadimitriou. “At present there is no bigger issue in the world than the Russian invasion of Ukraine, and this event gave our students the opportunity to engage live with the person who is at the forefront of these historic times.” 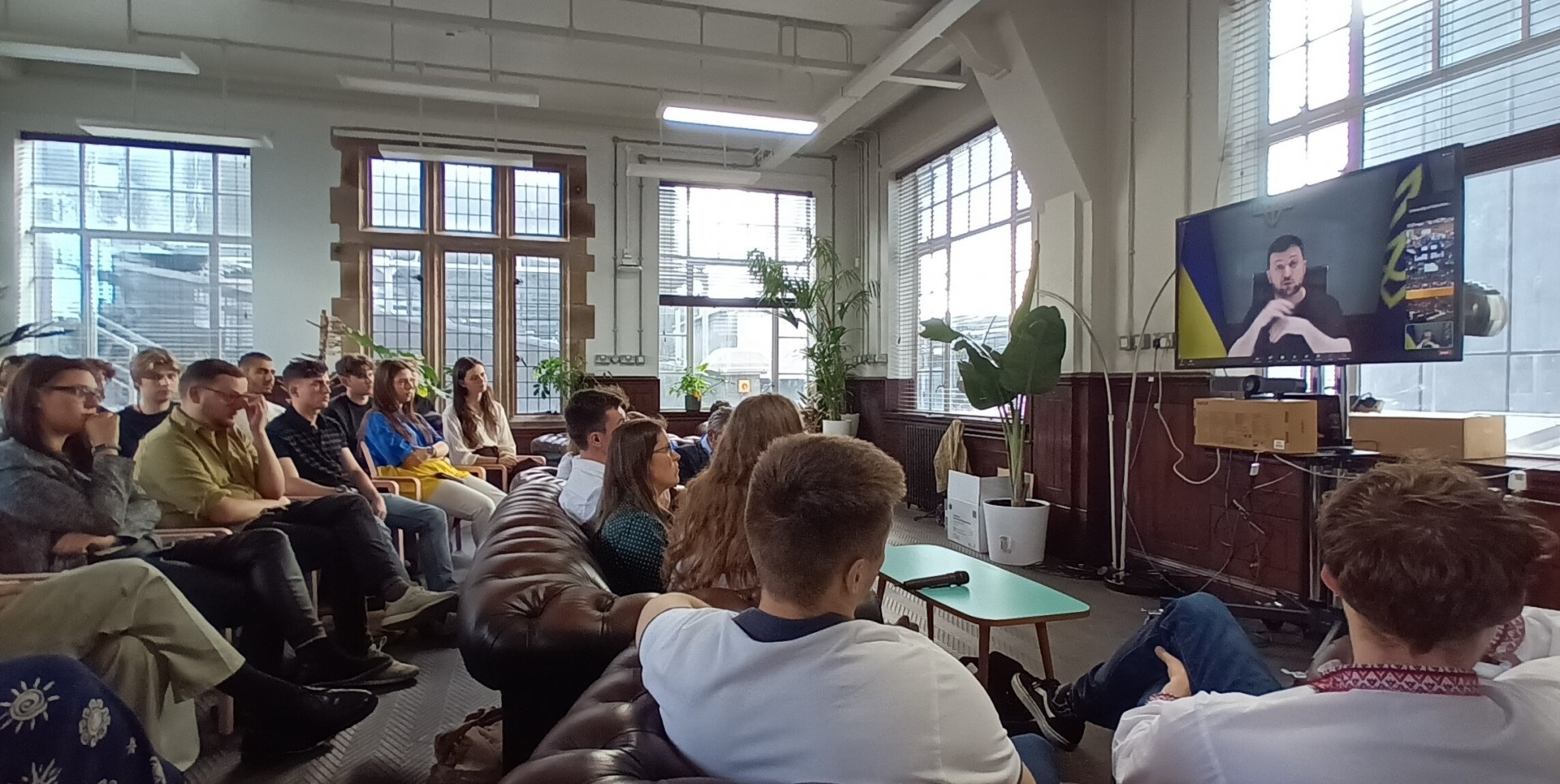 The responses of President Zelenskyy were informal and very engaging. There is no doubt that he is a charismatic communicator, and this is a precious quality in the battle of the Ukrainian government to win hearts and minds around the world.

“We were excited to speak to our President at such a difficult time, and to unite our voices with the struggle of the people of Ukraine,” said Mariia Horb, President of the University’s Ukrainian Society. 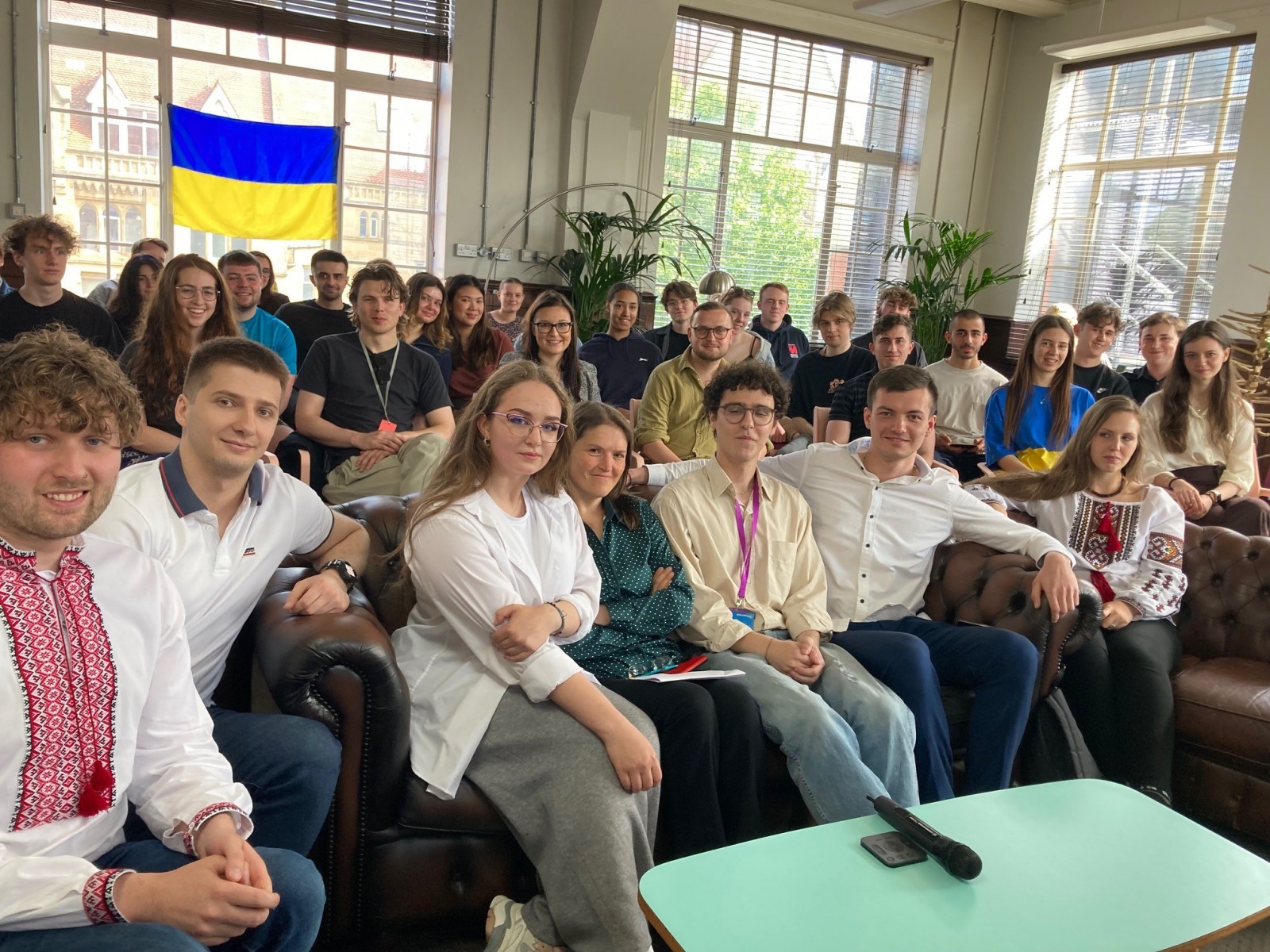