Study may explain link between antibiotic use in infants and asthma

Study may explain link between antibiotic use in infants and asthma 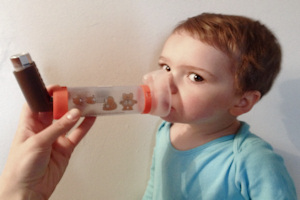 Children who receive antibiotics before their first birthday might be at a slightly increased risk of developing asthma. However, new research by The University of Manchester suggests that it is impaired viral immunity and genetic variants on a region of chromosome 17 that increase the risk of both antibiotic use in early life and later asthma rather than the antibiotics themselves, as previously thought.

Importantly, the study, which was funded by the Medical Research Council and J P Moulton Charitable Foundation did not find a link between early antibiotic prescription and the development of allergic reactions.

The findings, reported in The Lancet Respiratory Medicine today (15 May), contradict the prevailing theory that early antibiotic exposure, via changes in gut flora, alters the development of a child’s immune system, increasing susceptibility to allergic asthma later on.

In children, antibiotics are routinely used to treat respiratory infections, ear infections, and bronchitis, and several studies have reported a link between the use of antibiotics during early childhood and the subsequent development of asthma. However, systematic reviews have reported conflicting results and called for additional longitudinal studies to provide definitive answers.

In this study, UK researchers examined data from the Manchester Asthma and Allergy Study (MAAS) which has followed over 1000 children from birth to 11 years.

Information on antibiotic prescription, wheeze and asthma exacerbations were taken from medical records. Skin reaction tests that show whether a child is hypersensitive to allergens were done at ages 3, 5, 8, and 11 years.
At age 11, blood was collected from children who had received at least one course of antibiotics or no antibiotics in the first year of life to compare their immune-system cell response to viruses (rhinovirus; the virus responsible for the common cold, and respiratory syncytial virus; RSV) and bacteria (Haemophilus influenzae and Streptococcus pneumoniae). Genetic testing was also done to look at the links between common genetic variations on chromosome 17, known as 17q21, and antibiotic prescription.

The study’s findings are believed to be the first to show that children with wheezing who were treated with an antibiotic in the first year of life were more than twice as likely as untreated children to experience severe wheeze or asthma exacerbations and be hospitalised for asthma.

Similarly, these children also showed significantly lower induction of cytokines, which are the bodies’ key defence against virus infections such as the common cold. However, no differences were noted in antibacterial responses.

The researchers also identified two genes in the 17q21 region that were associated with an increased risk of early life antibiotic prescription.

Lead author Professor Adnan Custovic, from the Institute of Inflammation and Repair based at The University of Manchester, said: “We speculate that hidden factors which increase the likelihood of both antibiotic prescription in early life and subsequent asthma are an increased susceptibility to viral infections due to impaired antiviral immunity and genetic variants on 17q21.

“However, further studies will be needed to confirm that the impaired immunity was present at the time of the early childhood respiratory symptoms and predated antibiotic prescribing rather than as a consequence of the antibiotics.”

(Image courtesy of Arvind Balaraman / FreeDigitalPhotos.net)
This study was funded by the Medical Research Council and J P Moulton Charitable Foundation. To interview Professor Adnan Custovic or for a copy of the paper, please call Alison Barbuti, Media Relations Officer, +44(0)161 275 8383 or email alison.barbuti@manchester.ac.uk
The University of Manchester
The University of Manchester, a member of the Russell Group, is one of the largest and most popular universities in the UK. It has 20 academic schools and hundreds of specialist research groups undertaking pioneering multi-disciplinary teaching and research of worldwide significance. According to the results of the 2008 Research Assessment Exercise, The University of Manchester is one of the country’s major research institutions, rated third in the UK in terms of ‘research power’. The University has an annual income of £807 million and is ranked 40th in the world and fifth in the UK for the quality of its teaching and impact of its research.
More on the Medical Research Council
The Medical Research Council has been at the forefront of scientific discovery to improve human health. Founded in 1913 to tackle tuberculosis, the MRC now invests taxpayers’ money in some of the best medical research in the world across every area of health. Twenty-nine MRC-funded researchers have won Nobel prizes in a wide range of disciplines, and MRC scientists have been behind such diverse discoveries as vitamins, the structure of DNA and the link between smoking and cancer, as well as achievements such as pioneering the use of randomised controlled trials, the invention of MRI scanning, and the development of a group of antibodies used in the making of some of the most successful drugs ever developed. Today, MRC-funded scientists tackle some of the greatest health problems facing humanity in the 21st century, from the rising tide of chronic diseases associated with ageing to the threats posed by rapidly mutating micro-organisms. www.mrc.ac.uk
Some modules are disabled because cookies are declined. Accept cookies to experience the full functionality of this page.
ACCEPT COOKIES
We use cookies to optimize the website, no personal information is stored. Learn more
DECLINE COOKIES ACCEPT COOKIES