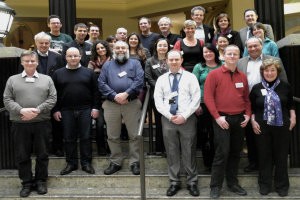 The University of Manchester is leading a €12 million systems medicine research network to identify better treatments for Inflammatory Bowel Disease like Crohn’s Disease.

The University of Manchester is leading a €12 million systems medicine research network to identify better treatments for Inflammatory Bowel Disease like Crohn’s Disease.

Professor Werner Müller from the Faculty of Life Sciences is the Scientific Co-ordinator for the network called SysmedIBD. It includes universities and companies from the UK, Germany, the Netherlands, Israel and New Zealand.

The aim of the five-year project is to better understand the disease, to identify risk genes, to investigate how diet can affect IBD, to develop new biomarkers and mathematical models that can predict the best treatment for a patient. This research network is based on the systems medicine approach in which individual patient specific details are used to build better mathematical models that in turn will provide the best possible treatment suggestions for the patients.

Professor Müller says: “This systems medicine approach will lead to a better personalized diagnosis and treatment of patients with inflammatory bowel disease. We will be targeting the central pathway of inflammation in the hope that by understanding the signalling processes we can eventually manipulate them.”

He continues: “IBD affects every patient differently making it very difficult to develop effective treatments. Current treatments are very expensive and many patients develop resistance to the drugs. We hope that this intense programme of research will help us to overcome the current limitations of treatments for this incurable condition.”

Prof Jonathan Rhodes from the collaborating group at the University of Liverpool says “This is a great boost for Inflammatory Bowel Disease research in the UK and stands an excellent chance of leading to benefits for patients”.

The scientists taking part in SysMedIBD have been meeting in Manchester to discuss the project. During the discussions they heard from the patient group Crohn’s & Colitis UK about what those affected by IBD would like to see come from the work of SysMedIBD.

Professor Müller says: “We hope our findings for Inflammatory Bowel Disease will also increase our understanding of other inflammatory conditions such as arthritis.”

Funding for the project has come from the European Union’s Seventh Framework Programme. The €12 million grant is being shared across the 12 participants with the largest share of €2.5 million coming to The University of Manchester.

Professor Müller is available for interviews.

An image of the project team is available from the press office.

SysMedIBD was awarded the funding by the EU in December 2012.

The project team held their first meeting on Thursday 21 and Friday 22 February in Manchester.