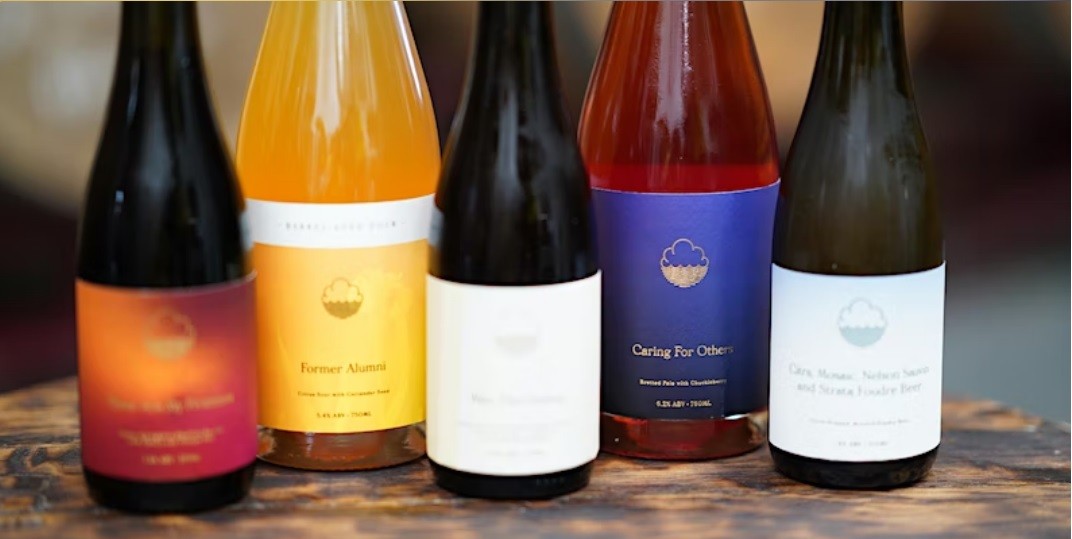 'Tales From The future' - a new way forward for beer brewing

‘Tales From The Future’, a beer made in a recent collaboration between researchers at The University of Manchester and Cloudwater Brew Co., will launch at the end of August 2022.

The beer is uniquely brewed using a novel strain of yeast, a hybrid, developed by the the Manchester Institute of Biotechnology (MIB) and Cloudwater.

‘Tales From The Future’ will be available in a limited batch directly from the Cloudwater website. The 750ml bottles are available to buy singly or as a pack. This Manchester-made beer will also be available from Cloudwater’s taproom.

Budding yeast has been integral to beer brewing since its conception, and recent discoveries of new wild yeast species have paved the way for exploiting the extant biodiversity in strain development. In 2017, Professor Daniela Delneri, from the MIB, and her team, isolated a new natural yeast species, Saccharomyces jurei, high up in the foothills of the French Alps.

It is set apart from other similar brewing yeasts as it has the ability to thrive at lower temperatures, has a different flavour profile, and is able to ferment maltose and maltotriose, two abundant sugars present in the wort. This opened up an array of new possibilities for brewers, including the development of new breeding protocols to combine the S. jurei genome with the genomes of commercially available strains to create a multitude of hybrids with different fermentation characteristics.

It is brilliant to be able to work directly with Cloudwater Brew Co. to realise the potential of our new yeast species. Based on our work, S. jurei’s hybrids afford brewers more flexibility and options when brewing beers with different flavours and aromas. From here we can build on our work to create new yeast strains for different brewing needs.

It is from this discovery that Paul Jones, CEO of Cloudwater Brew Co. first saw the potential opportunity to work with the MIB to create a yeast specific to Cloudwater’s needs. In a recent study, supported by a Knowledge Transfer Partnership (KTP) with Cloudwater Brew Co., Delneri’s team and KTP Associate Konstantina Giannakou, they crossed this newly discovered yeast strain with a common ale yeast (Saccharomyces cerevisae) to produce new starter hybrid strains that could influence the aroma and flavour profile of the beer.

Paul said of the partnership: “We are excited to be launching this beer following on from our work with The University of Manchester. This beer represents the possibilities of joining academia with industry and the importance of projects facilitated by this Knowledge Transfer Partnership. We cannot wait to share the fruits of our labour.”

Professor Daniela Delneri says: “It is brilliant to be able to work directly with Cloudwater Brew Co. to realise the potential of our new yeast species. Based on our work, S. jurei’s hybrids afford brewers more flexibility and options when brewing beers with different flavours and aromas. From here we can build on our work to create new yeast strains for different brewing needs.

“In fact, we have now also developed a method to turn typically sterile yeast hybrids into fertile cells able to produce a plethora of offspring which can be screened for desirable biotechnological traits. Such advances allow us to combine and select desirable traits from different yeast species via multigenerational breeding, paving the way for a swathe of new and exciting products”.

To launch the beer, Cloudwater Brew Co., in partnership with the MIB, will be hosting an event at the Cloudwater Taproom on Thursday 25 August.  Additionally, at 7pm a dedicated tasting session will take place where ‘Tales From The Future’ will feature alongside five other beers from the Barrel Project. More information and tickets for the tasting session are available via EventBrite.

'Tales From The future' - a new way forward for beer brewing