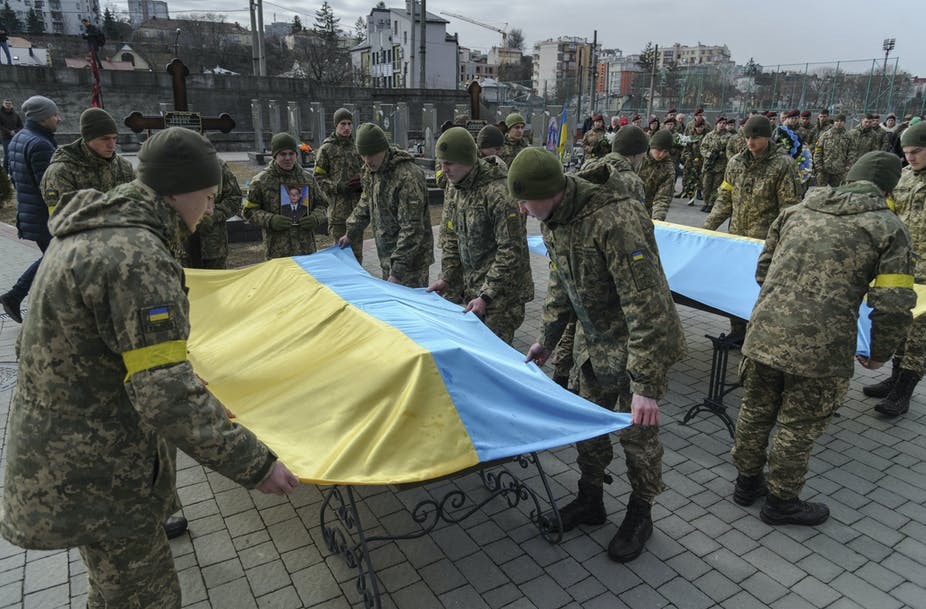 The history and evolution of Ukrainian national identity – podcast

And we hear about a rare archive of Ukrainian dissident literature from the Soviet era, and why it’s now in danger.

History is central to understanding why the Russian invasion of Ukraine happened, and what might happen next. And in this episode, we’re exploring the history of Ukrainian national identity.

Dominique Arel, professor and holder of the chair of Ukrainian studies at the University of Ottawa in Canada, explains how Ukrainian national identity started to emerge in the 19th century, when the territory that later became Ukraine was split between the Russian empire to the east and the Austro-Hungarian empire to the west.

When Ukraine became independent in 1991 after the fall of the Soviet Union, anyone living on the territory had a right to citizenship. At that time, a little less than a quarter of the population identified as ethnically Russian and three-quarters as ethnically Ukrainian – alongside minorities, including Crimean Tatars. But researchers point to shifts in those identities since then.

Volodymyr Kulyk is head research fellow at the Institute of Political and Ethnic Studies at the National Academy of Sciences of Ukraine. He spoke to us from Kyiv. “To be Ukrainian used to mean to be Ukrainian by descent to be a Ukrainian origin or in the Soviet official parlance to be of Ukrainian nationality,” he says, explaining that nationality was “primarily understood in ethnic, hereditary terms”.

The Euromaidan protests of 2013-14 marked a turning point. Olga Onuch, a senior lecturer in politics at the University of Manchester in the UK, has been part of a number of studies surveying Ukrainians about their views and identity, and their politics. She says they’ve found that “civic identity or state attachment was extremely strong amongst Ukrainians, across linguistic and across regions”, and that it was increasing over time. “As the conflict escalated, so did support for the Ukrainian state,” says Onuch.

Her research is also tracking shifts in political attitudes. This was incremental at first, in the years following 2014, but after the election of the current president, Volodymyr Zelensky, in 2019, Onuch says there was a “huge jump” in support for Ukraine joining the EU and NATO, which she calls the “Zelensky effect”.

Our second story brings a personal perspective to some of this history. During the Soviet era, when Ukrainian language was repressed, it was dangerous to publish Ukrainian political and cultural texts within Ukraine. One man, Wolodymyr “Mirko” Pylyshenko, in the diaspora Ukrainian community in the US began collecting this dissident literature. His daughter, Katja Kolcio, an associate professor of dance and environmental studies at Wesleyan University in the US, tells the story of the archive – and why it’s now in danger. (From 36 minutes)

And Moina Spooner, news editor for The Conversation in Nairobi, Kenya, recommends some analysis marking the two-year anniversary of the COVID-19 pandemic. (From 48m)

This episode of The Conversation Weekly was produced by Mend Mariwany and Gemma Ware, with sound design by Eloise Stevens. Our theme music is by Neeta Sarl. You can find us on Twitter @TC_Audio, on Instagram at theconversationdotcom or via email. You can also sign up to The Conversation’s free daily email here.

You can listen to The Conversation Weekly via any of the apps listed above, download it directly via our RSS feed, or find out how else to listen here.

The history and evolution of Ukrainian national identity – podcast