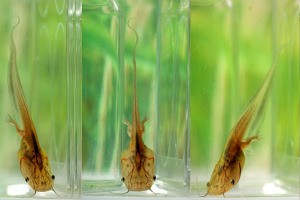 Scientists at The University of Manchester have made a surprising finding after studying how tadpoles re-grow their tails which could have big implications for research into human healing and regeneration.

It is generally appreciated that frogs and salamanders have remarkable regenerative capacities, in contrast to mammals, including humans. For example, if a tadpole loses its tail a new one will regenerate within a week. For several years Professor Enrique Amaya and his team at The Healing Foundation Centre in the Faculty of Life Sciences have been trying to better understand the regeneration process, in the hope of eventually using this information to find new therapies that will improve the ability of humans to heal and regenerate better.

In an earlier study, Professor Amaya’s group identified which genes were activated during tail regeneration. Unexpectedly, that study showed that several genes that are involved in metabolism are activated, in particular those that are linked to the production of reactive oxygen species (ROS) - chemically reactive molecules containing oxygen. What was unusual about those findings is that ROS are commonly believed to be harmful to cells.

Professor Amaya and his group decided to follow up on this unexpected result and their new findings will be published in the next issue of Nature Cell Biology.

To examine ROS during tail regeneration, they measured the level of H2O2 (hydrogen peroxide, a common reactive oxygen species in cells) using a fluorescent molecule that changes light emission properties in the presence of H2O2. Using this advanced form of imaging, Professor Amaya and his group were able to show that a marked increase in H2O2 occurs following tail amputation and interestingly, they showed that the H2O2 levels remained elevated during the entire tail regeneration process, which lasts several days.

Talking about the research Professor Amaya says: “We were very surprised to find these high levels of ROS during tail regeneration. Traditionally, ROS have been thought to have a negative impact on cells. But in this case they seemed to be having a positive impact on tail re-growth.”

Professor Amaya says: "When we decreased ROS levels, tissue growth and regeneration failed to occur. Our research suggests that ROS are essential to initiate and sustain the regeneration response. We also found that ROS production is essential to activate Wnt signalling, which has been implicated in essentially every studied regeneration system, including those found in humans. It was also striking that our study showed that antioxidants had such a negative impact on tissue regrowth, as we are often told that antioxidants should be beneficial to health."

The publication of Professor Amaya's study comes just days after a paper from the Nobel Prize winner and co-discoverer of the structure of DNA, James Watson, suggested antioxidants could be harmful to people in the later stages of cancer.

Professor Amaya comments: "It's very interesting that two papers suggesting that antioxidants may not always be beneficial have been published recently. Our findings and those of others are leading to a reversal in our thinking about the relative beneficial versus harmful effects that oxidants and antioxidants may have on human health, and indeed that oxidants, such as ROS, may play some important beneficial roles in healing and regeneration."

The next step for the team at the Healing Foundation Centre will be to study ROS and their role in the healing and regenerative processes more closely. With a better understanding, Professor Amaya and his team hope to apply their findings to human health to identify whether manipulating ROS levels in the body could improve our ability to heal and regenerate tissues better. Thus these findings have very important implications in regenerative medicine.

The paper “Amputation-induced reactive oxygen species are required for successful Xenopus tadpole tail regeneration” will be published in Nature on Sunday 13 January 2013.

The Healing Foundation Centre represents a 25 year, £10 million commitment between The Healing Foundation and The University of Manchester to advance the understanding of wound healing and tissue regeneration. The ultimate goal of the centre is to identify treatments that will improve the lives of patients with disfigurements, either congenital, or following accident and disease.

For more information or for interview and image requests please contact: