Manchester – famous for The Smiths, The Stone Roses, Oasis…and now The Robots! 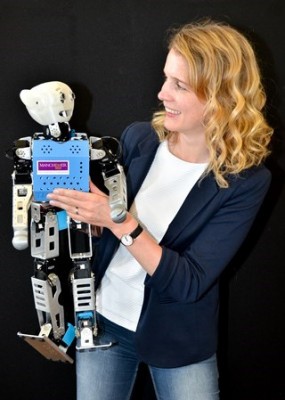 This year Manchester’s famous music scene is home to another breakthrough - a Robot Orchestra. Made by children, and performing all styles of music from classical to soul, the Robot Orchestra will make its public debut on Wednesday 26 October at the Museum of Science and Industry as part of Manchester’s Science Festival. The performance will be performed in partnership with a range of Manchester-based organisations and bands.

Danielle George MBE, an engineering professor at The University of Manchester, has led the challenge to build a giant Robot Orchestra following on from the 2014 Christmas Lectures. The project has been supported by engineering giants Siemens and has encouraged young people across Greater Manchester to learn computer coding and recycle old instruments and electronics to make the Robot Orchestra.

The orchestra creates music by playing instruments and recycled technology led by a robotic conductor called Graphene designed by MSF headline sponsors, Siemens. The performances will include the debuts of three original pieces written specifically for the Robot Orchestra. Manchester-based Brighter Sound, which pioneers new ways to explore music-making, has played a key role in bringing local, up and coming band Family Ranks and LayFullStop to the project.

As well as Family Ranks and LayFullStop, local flautist Gavin Osborn will accompany a piece entitled ‘Etude for Flute and 16 Robots’ written by composer and Head of Music at The University of Manchester Camden Reeves., Manchester-based electronic music producers and performers Caro C + Uno Prism, will also perform ‘Robotopia’.

“We’re so proud that the Robot Orchestra will be performing at the Manchester Science Festival – and for us to showcase the city’s diverse musical talent is a fantastic opportunity. Building the orchestra has been an amazing experience for all involved. From the hundreds of schoolchildren who created the robots, to the engineers from the University and Siemens who have made all these components work in harmony – to the musicians who have ensured our devices are creating such wonderful music.”

The Robot Orchestra is a University of Manchester initiative in association with The European City of Science and funded by EPSRC, Siemens and The Granada Foundation. It will perform on Wednesday 26 October at 11.00am, 1.00pm and 3.00pm at the Museum of Science and Industry, and entry is free of charge.

For more about the University's involvement in the Science Festival, visit http://www.manchester.ac.uk/science-festival.

Manchester – famous for The Smiths, The Stone Roses, Oasis…and now The Robots!