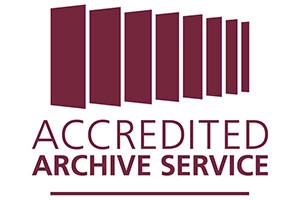 The University of Manchester Library has been awarded Archive Service Accreditation.

Accredited Archive Services ensure the long-term collection, preservation and accessibility of our archive heritage. Accreditation is the UK quality standard which recognises good performance in all areas of archive service delivery. Achieving accredited status demonstrates that The University of Manchester Library has met clearly defined national standards relating to management and resourcing, the care of its unique collections and what the service offers to its entire range of users.

The University of Manchester Library holds one of the largest and most diverse collections of archives in the UK, spanning many centuries and covering a vast range of subjects. The archives are managed by a team of professional archivists and other specialists within the Library’s Curatorial Practices Directorate.

We are delighted to have been awarded Archive Service Accreditation. This award recognises our ongoing commitment to develop, preserve and improve access to our internationally important archives. I am immensely proud of the expertise and dedication of our amazing team of archivists and other professionals across The University of Manchester Library, who make this one of the great libraries and archives of the world.

The Accreditation Panel said it “welcomed this application from a highly effective service which has done impressive work in its strategic positioning, with staff skills and in provision for its collections in all formats. They considered the service highly accreditable, and congratulated the team on the strength of their work.”

Highlights of the archives include: