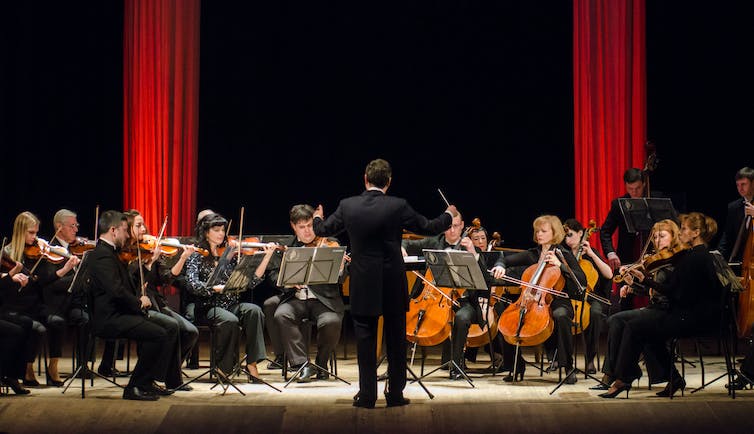 Hearing loss and tinnitus (ringing, buzzing or whistling noises in the absence of any external sounds) are serious problems for music industry workers. The conditions can affect musical standards, limit employment and damage general wellbeing. Yet music industry workers’ susceptibility to hearing problems is not well understood, as it can take years before the damage becomes severe enough to be detected by conventional tests and many people in the industry don’t get their hearing tested.

At the Manchester Centre for Audiology and Deafness, we are trying to get a better understanding of the effects of noise exposure on musicians’ hearing. As part of this project, we recently analysed data on hearing difficulties and tinnitus in 23,000 people from the UK Biobank, an online database of medical and lifestyle records of half a million Britons. The most striking finding was that music industry workers were almost twice as likely to report tinnitus compared with people working in the finance industry.

That’s not to say that music industry workers are immune to noise-induced hearing loss. The relatively good hearing in this group was probably because they had developed strong auditory and cognitive skills through years of musical listening and training. This could mean that the hearing-in-noise test (a standardised test that measures sentence recognition in background noise) was easier for them, which could counteract any hearing loss that they have as a result of noise exposure.

Or conversely, hearing loss brought about by noise exposure could decrease musicians’ superior skills for being able to hear in noisy environments, so that their performance is similar to that of finance workers. Our ongoing investigation using sophisticated methods for measuring musicians’ hearing may provide some evidence to support this explanation.

We also found that health and lifestyle had little effect on tinnitus and hearing difficulties. Noise exposure was by far the biggest risk factor for tinnitus for people working in the music industry, including musicians, music directors and production staff for all genres of music.

The permissible limit for occupational noise in the UK is an average of 85 decibels based on an eight-hour working day. The length of safe noise exposure is reduced by half for every three decibels increase in noise intensity. This equals four hours of daily exposure for 88 decibels of noise, two hours for 91 decibels, and so on. Most amplified concerts exceed 100 decibels, meaning that music industry workers shouldn’t be exposed to this level of noise for more than 15 minutes without proper hearing protection.

The findings from our study, published in Trends in Hearing, confirm the concerns that music industry workers have about the impact of their work on their hearing health. The list of high-profile musicians who reportedly suffer from tinnitus continues to grow, including Liam and Noel Gallagher, Chris Martin, Ozzy Osbourne and Bob Dylan.

Classical music players are at risk, too. Earlier this year, The Royal Opera House lost its legal appeal over the life-changing hearing damage caused to a viola player at a single rehearsal of Wagner’s Die Walküre.