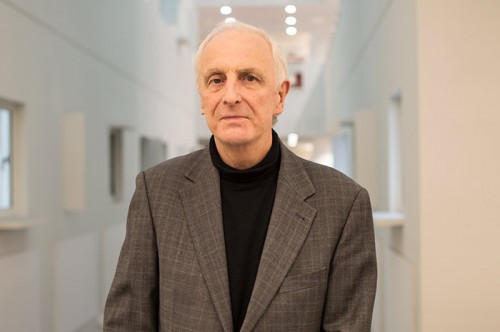 British economist, Tony Shorrocks, has been made an Honorary Professor at the Global Development Institute (GDI) in acknowledgement of his contribution to researching inequality. Tony met with some of our GDI academics to discuss how he can support the University of Manchester’s Global Inequalities research beacon.

Tony has spent a lifetime working on inequality topics, especially measurement issues. He is particularly well known for the “Shorrocks Index” of mobility, which links inequality of short-term earnings – such as annual income of households – to the inequality of long-term earnings – such as 5 year or 10 year total income for same households. More recently, he has played a lead role in producing the annual Global Wealth Report for Credit Suisse Research, which inter alia monitors the worldwide level and trend of household wealth inequality.

Tony taught at the London School of Economics and at the University of Essex before becoming Director of the World Institute of Development Economics Research (UNU-WIDER) in January 2001. He has published extensively in leading economic journals on topics concerned with income and wealth distribution, inequality, poverty and mobility. In 1996 he was elected a Fellow of the Econometric Society. In addition to the Global Wealth Report, recent publications include Perspectives on Growth and Poverty (2003); Growth, Inequality and Poverty (2004); and Advancing Development: Core Themes in Global Economics (2007).

Tony Shorrocks commented, “Global inequalities have been my core research focus for the past ten years. The University of Manchester’s interest in global inequalities with an institute which is approaching its 60th anniversary meant I was delighted to be asked to take up the position of Honorary Professor. Right now I am particularly interested in how a multitude of data sources can be harnessed to improve our understanding of the level and trend of both wealth and income inequality. I look forward to talking about these and other issues at events and masterclasses here at the Global Development Institute.”

We welcome Tony and are delighted to have him alongside us in our efforts to address global inequalities.