The latest news about advanced materials 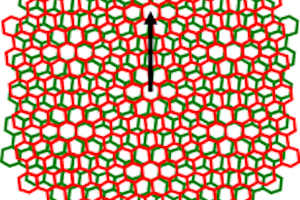 When two sheets of graphene are stacked in a special way, it is possible to cool down the graphene with a laser instead of heating it up, University of Manchester researchers have shown.

In an article published in Nano Letters, a multi-national team of scientists including Dr Aravind Vijayaraghavan from Manchester, Professor Ado Jorio from Belo Horizonte in Brazil and Professor Lukas Novotny from Zurich have shown how laser light interacts with a special kind of graphene to cool it down. This would make it possible to make electronic devices of graphene run cooler and faster simply by shining a laser on it.

In their experiment, the scientists used two stacked sheets of graphene, but with one sheet rotated by 11.3° with respect to the other. Lasers are commonly used to make things hotter, to burn them or even to melt metal. But this so called ‘twisted bi-layer graphene’ has very unique properties. At special combinations of twist angle and laser energy, the exact opposite happens.

Dr Vijayaraghavan, who leads the Nano-functional Materials Group, explains “In any material, heat is stored in the vibrations of atoms; in a hot material, atoms are vibrating faster than in a colder material. When a laser of a specific energy (colour) is shone on this twisted graphene, the particles of light in the laser (called photons) will absorb the vibration energy of the atoms, thereby cooling the system down.”

Nick Clark, a PhD student in Vijayaraghavan’s group, describes how this special graphene is produced. “When we make graphene flakes using sticky tape, some flakes have edges which are straight, giving an indication of the direction the atoms are oriented in. We identify two such flakes, and then line them up so that the straight edges are at a fixed angle. The angle we need to produce depends on the colour of the laser light we will be using.”

According to Dr Vijayaraghavan, this new discovery has tremendous technological implications. He adds “As you might have experienced, if a computer chips runs fast, it gets very hot. This will also be true for future computer chips that might be made with graphene. If it is possible to cool down the chip, then it can run faster. Currently, people use air conditioning, cold water or even liquid nitrogen to keep their computers cool. A future graphene computer might be cooled by shining a laser on it.”

The paper, Optical-phonon resonances with saddle-point excitons in twisted-bilayer graphene by A Jorio, M Kasperczyk, N Clark, E Neu, P Maletinsky, A Vijayaraghavan, and L Novotny appears in Nano Letters (10.1021/nl502412g) on 16/09/2014, and is the result of a collaboration involving researchers from Manchester, Belo Horizonte, Zurich and Basel.