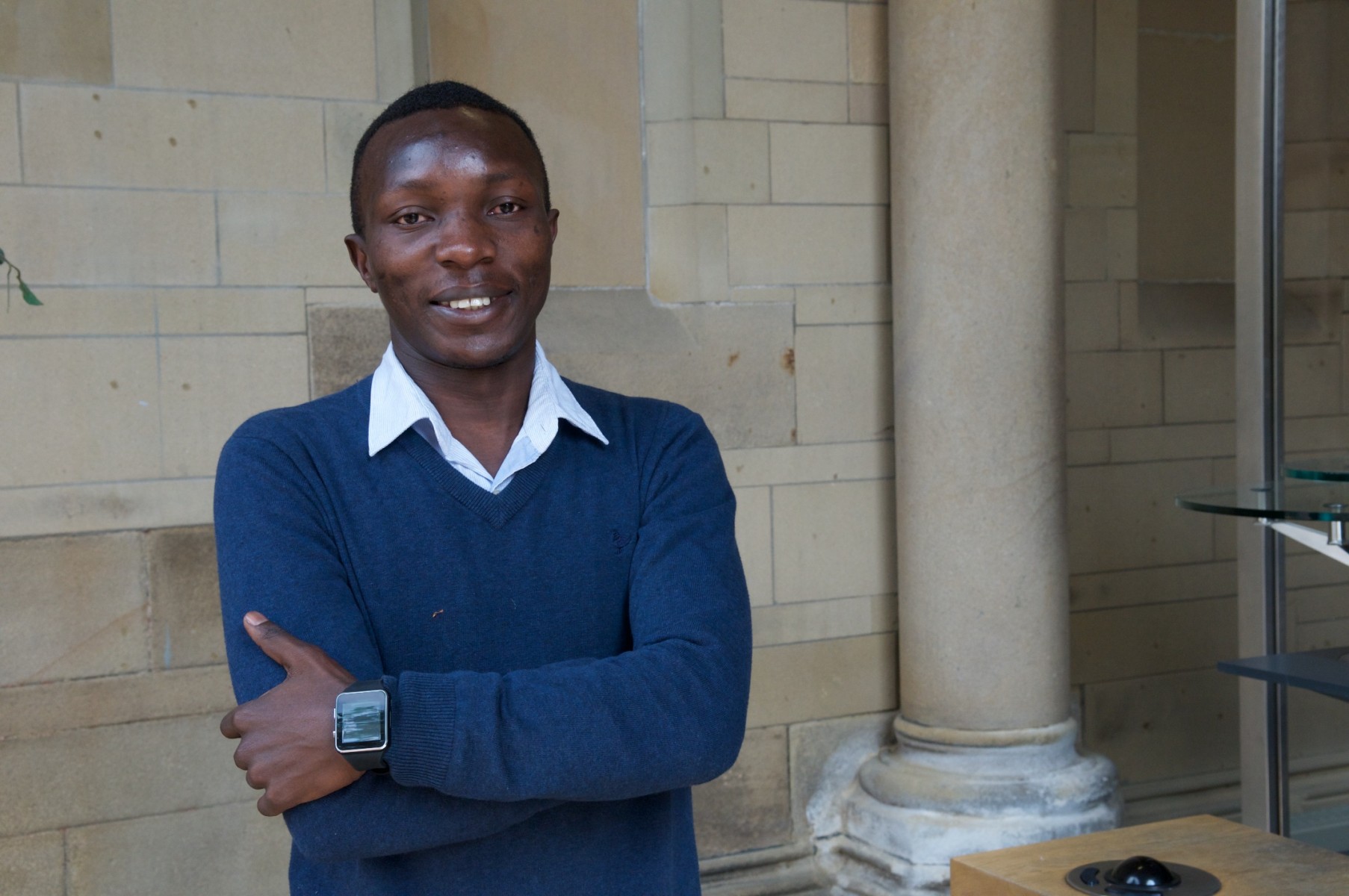 A student from Uganda who was able to do his master’s degree at The University of Manchester thanks to an Equity and Merit scholarship has just graduated, and hopes to use his skills to prevent flooding in his home country.

Tom Geme grew up in one of the many slums in Kampala, Uganda’s capital city, where the homes of his family and his neighbours were regularly flooded because of poor environmental conditions and a lack of efficient planning and environmental regulations. He was an extremely bright child, and was supported throughout primary and secondary school by social workers who were working in the country at the time.

After school, he realised that he wanted to study environmental management to help improve the lives of his fellow Ugandans. After studying Environmental Conservation and Forestry in Kampala, he began working for Busoga Forestry Company (a Ugandan Subsidiary of Green Resources, Norway), East Africa’s largest forestry and carbon offset project.

However, he wanted to expand his skills further, and subsequently discovered that he could study MSc Environmental Impact Assessment and Management at The University of Manchester thanks to an Alan Gilbert Memorial Equity & Merit Scholarship.

“On joining Busoga Forestry in 2014, I met Rogers Muyambi (a former Equity and Merit Scholar) who had himself just returned to the company after his studies at Manchester,” Tom said. “I told him about my aspirations, and that is when I found out about the Equity and Merit Scholarship Programme. I could not apply immediately as I had to acquire the required work experience – but this waiting time was crucial, as it enabled me to explore career options and aspects I considered important to me both socially and professionally.”

He is now set to return to Uganda and use his new skills to contribute to much-needed sustainable development in the country. He is particularly keen on bridging the gap between the development of infrastructure (like roads, housing, bridges, power stations, industries), large scale activities like agriculture, forestry and mining, and environmental sustainability. This is in a bid to avoid or mitigate negative impacts such as flooding.

Now in its eleventh year, Equity and Merit funds students from Uganda, Rwanda, Tanzania and Ethiopia to take a postgraduate course that isn’t available in their home country. More than 250 exceptional individuals who are committed to the economic or social development of their home communities have been able to study at Manchester, before using their newly-gained knowledge to fight diseases such as malaria, build low-cost housing for slum dwellers or bring electricity to remote communities.

The scholarships reflect the University’s commitment to widening access to higher education, ensuring individuals gain life changing experiences based on equity as well as merit. They are jointly funded by the University and its donors - the University covers the tuition fee in full and the generosity of donors covers students’ living costs, flights to the UK and visas.

Equity and Merit scholarships really do change lives, as they enable recipients to study at a world-class university who would be unable to do so without a scheme like this,” said Joanne Jacobs from the University’s International Office, who oversees the scholarships.

“Tom is another one of the talented students we’ve been able to welcome over the last eleven years, and I am sure he will go on to make a significant contribution to the development of Uganda.”