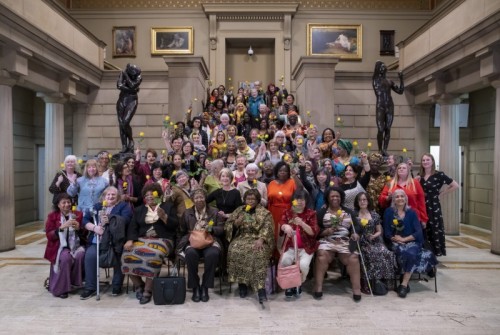 The Uncertain Futures team has been nominated for a Manchester Culture Award 2022 in the category of Protection of Equality and Social Justice. The Manchester Culture Awards – which were launched in 2018 and are organised by Manchester City Council – provide an annual opportunity to recognise and showcase the talent, creativity and culture that makes Manchester so unique. The winners will be announced on November 24th at an awards ceremony in Manchester.

The Uncertain Futures project is a unique art and research collaborative work which aims to highlight and analyse the intersectional inequalities facing women over 50 around work (whether paid or unpaid). This includes inequalities relating to gender, age, race, disability, migration and other statuses. The project combines art, research and activism through which it aims to achieve social change. The projected was initially conceived by artist Suzanne Lucy and is supported by an Advisory Group formed of women over 50 from Manchester’s diverse communities in association with Manchester Art Gallery and Manchester City Council’s Work and Skills Team. It is also supported by a research team from the University of Manchester (Dr Elaine Dewhurst) and from Manchester Metropolitan University (Dr Sarah Campbell).

In June 2021, the exhibition opened with live interviews taking place with 100 women over 50 from all walks of life, alongside workshops, talks and media presentations that explored equality and survival. The interviews were also displayed on the wall of the Gallery until September 2022 when they were replaced by a newly designed exhibit in Gallery 8 to reflect the ever-changing nature of the project. The exhibition now contains a timeline of significant moments of the project as well as identifying important research themes.

The research analysis also began in the summer of 2022 and involves co-analysis of the interviews by the research team which includes members of the Advisory Group and will culminate in a report to be launched in the first half of 2023, alongside a series of events designed to impact social policy and create change.