University of Manchester scientists win the Nobel Prize for Physics 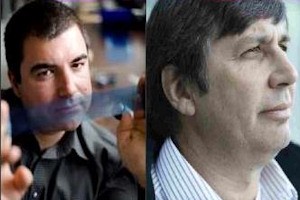 Two scientists who discovered graphene at The University of Manchester have today been awarded the Nobel Prize for Physics.

Professor Andre Geim and Professor Konstantin Novoselov have been awarded the highest accolade in the scientific world for their pioneering work with the world’s thinnest material.

Graphene was discovered at the University in 2004. It has rapidly become one of the hottest topics in materials science and solid-state physics.

Professor Novoselov, 36, known as Kostya, first worked with Professor Geim, 51, as a PhD-student in the Netherlands. He subsequently followed Geim to the United Kingdom. Both of them originally studied and began their careers as physicists in Russia.

The award of the Nobel Prize means there are currently four Nobel Laureates at The University of Manchester.

Professor Geim said: “This is a fantastic honour. People have been talking about graphene as a possible prize winner for a number of years so for the community in graphene research it hardly comes as a surprise.

“However I personally did not expect to get this prize. I slept soundly last night because I never expected to win it.

“Having won the Nobel Prize, some people sit back and stop doing anything, whereas others work so hard that they go mad in a few years. But I will be going into the office as usual and continuing to work hard and paddle through life as usual.

“I have lots of research papers to work on at the moment which all need writing up so I will be carrying on as normal.

“I have a fantastic working relationship with Kostya. We worked together in Holland and then I managed to bring him to England with me.

“Very often I fall out with people who don’t work hard but I have never fallen out with those who work as hard as Kostya.”

Professor Konstantin Novoselov said: “I was really shocked when I heard the news and my first thought was to go to the lab and tell the team.

“I didn’t know until this morning when I had a call from Stockholm.

“We have had a fantastic seven years working together on this new material graphene.

“The University is well suited to this style of research- we have excellent facilities.

“It’s great to be a young academic at The University of Manchester and I’m grateful to everyone who has collaborated with us.”

Graphene is a two-dimensional layer of carbon atoms that resembles chicken wire.

Since its discovery, Professor Geim and Dr Novoselov have published numerous research papers in prestigious journals such as Science and Nature, which have demonstrated the exquisite new physics for the material and its potential in novel applications such as ultrafast transistors just one atom thick – making it a potential successor to silicon – and sensors that can detect just a single molecule of a toxic gas.

A team of materials scientists and physicists from Manchester recently reported that graphene has the potential to replace carbon fibres in high performance materials that are used to build aircraft.

University of Manchester President and Vice-Chancellor Nancy Rothwell said: “This is fantastic news. We are delighted that Andre and Konstantin’s work on graphene has been recognised at the very highest level by the 2010 Nobel Prize Committee.

“This is a wonderful example of a fundamental discovery based on scientific curiosity with major practical, social and economic benefits for society.”

Vice-President and Dean of Engineering and Physical Sciences Professor Colin Bailey added: “This is a truly tremendous achievement, and is a testimony to the quality of research that is being carried out in Physics and more broadly across the University”.

Professor David Delpy, Chief Executive, EPSRC, said: “This work represents an enormously important scientific development. An exciting new material that has a huge range of applications and will no doubt bring significant benefits to the UK economy.

"EPSRC has been supporting research by Professor Geim and his group for nearly 10 years and our latest grant has enabled the UK to retain the key academic and research staff behind this discovery, who might otherwise have been lost to foreign institutions.”

Media enquiries and interview requests should be directed to Dan Cochlin in the University of Manchester Press Office on 0161 275 8387.

Prof Geim was born in Russia in Oct 1958 to German parents and has Dutch nationality.

He holds the position of Langworthy Research Professor at The University of Manchester, previously held by leading names in physics such as Rutherford, Bragg and Blackett.

He also serves as Director of Manchester Centre for Mesoscience and Nanotechnology, based at The University of Manchester, and is a Fellow of the Royal Society (FRS). In addition, Prof Geim holds a Royal Society 2010 Anniversary Research Professorship.

Prof Geim gained a PhD in 1987 at the Institute of Solid State Physics, Chernogolovka, Russia.

After working there for another three years, he conducted research in England and Denmark. In 1994, he was appointed Associate Professor at the University of Nijmegen in the Netherlands

He joined The University of Manchester in 2001 as Professor of Physics.

During his career, Prof Geim has published over 150 peer-refereed research papers, including many in Nature and Science.

He is best known for his discovery of two-dimensional crystals made of carbon atoms – and most notably graphene – in 2004 with Prof Kostya Novoselov, also of The University of Manchester (see below).

Since then, graphene has rapidly become one of the hottest topics in materials science and solid-state physics.

Prof Geim’s work has led to a number of prestigious awards. In 2007 he was given the Mott Prize “for the discovery of a new class of materials – 2D atomic crystals – particularly graphene”.

In September 2008, Prof Novoselov and Prof Geim were awarded the prestigious Europhysics Prize for discovering graphene - and also their subsequent work to reveal its remarkable electronic properties.

In April 2009, Prof Geim received the Körber European Science Award for his discovery of two-dimensional crystals made of carbon atoms – and particularly graphene.

This was soon followed by the award of a Royal Society 2010 Anniversary Research Professorship in celebration of the Society's 350th anniversary.

Prof Geim’s earlier educational experiments on diamagnetic levitation have been publicised by the media all over the world and are featured in dozens of textbooks. As part of this work, Prof Geim famously levitated a frog.

Prof Geim is also well known for demonstrating a new microfabricated adhesive, which is based on the same physics mechanism that underlies the amazing climbing ability of geckos.

Prof Novoselov was born in Russia in August 1974. He also has British citizenship.

He also holds the position of Royal Society Research Fellow at The University. In 2008 he was named as one of The University of Manchester’s Researchers of the Year.

Prof Novoselov has published over 90 peer-refereed research papers, mainly as the principal or corresponding author, including several in Nature and Science.

His pioneering work with Prof Andre Geim led to the discovery of two-dimensional crystals made of carbon atoms, and most notably graphene.

In 2008 Prof Novoselov was selected from more than 300 nominees under the age of 35 by a panel of expert judges and the editorial staff of Technology Review following his discovery of graphene with Professor Andre Geim in 2004.

In September of the same year, Prof Novoselov and Prof Geim were awarded the prestigious Europhysics Prize for discovering graphene - and also their subsequent work to reveal its remarkable electronic properties.

Since the discovery of graphene in 2004, Prof Geim and Prof Novoselov have published numerous research papers in prestigious journals such as Science and Nature, which have demonstrated the exquisite new physics for the material and its potential in novel applications such as transistors just one atom thick and sensors that can detect just a single molecule of a toxic gas.

In April 2008, Prof Geim, Prof Novoselov and Dr Leonid Ponomarenko published a paper in the leading journal Science, which reported that they had used graphene to create the world's smallest transistor, one atom thick and ten atoms wide.

Novoselov’s original joint paper on grapheme in Science in 2004 has also been acknowledged as “one of the most cited recent papers in the field of Physics” according to the ISI citation index.