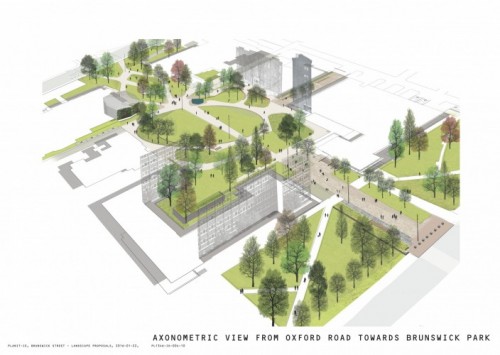 The University of Manchester has unveiled plans to create a parkland at the heart of its campus to benefit staff, students, visitors and the local community.

Brunswick Street will be extensively landscaped creating Brunswick Park, the largest green space on the campus with the proposals including tree planting, wildflower planting, seating areas, pedestrian and cycle paths.

The opportunity to develop a large area of green public realm has been presented by the Cross City bus corridor works to Oxford Road which will close the western end of Brunswick Street to vehicles later this year meaning the route will no longer be used by through traffic.

The street, which is lined on both sides by University buildings, is a hub for staff and students but will remain a public pedestrian and cycle route with improved pathways providing a better connection between Oxford Road and Upper Brook Street and forming an important gateway to the campus.

As well as providing spaces for meeting, relaxation and contemplation, the proposals would create a central space for large-scale campus events such as graduation and Welcome Week. Its prime location also provides an impressive setting for the University’s historic buildings along Oxford Road including the Whitworth Hall and the Queen’s Arch.

Consultation has taken place with Manchester City Council and the Brunswick ward whilst drawing up the proposals. Further community based consultation will be taking place in the near future.

These proposals form a centrepiece of our vision and will create a heart of the University campus for staff, students, visitors and the local community to enjoy

Diana Hampson, Director of Estates and Facilities at the University, said: “The University is transforming the campus through its £1 billion Campus Masterplan and that includes a commitment to environmental sustainability by improving our green spaces and public realm. These proposals form a centrepiece of our vision and will create a heart of the University campus for staff, students, visitors and the local community to enjoy.”

Brunswick Park is one of many schemes the University is undertaking to `green’ the campus. The Graphene Engineering Innovation Centre (GEIC) development, which will re-invigorate this part of the University’s North Campus around the site of the Faraday building, will include a Pocket Park and a new landscaping scheme promoting biodiversity and improving access.

Landscaping is being incorporated across all of the major new build capital projects which are being developed as part of the Campus Masterplan. Inevitably there will be a loss of trees in some areas to make way for these, however there are opportunities to introduce significant planting in other areas, such as Brunswick Park, which will see an overall increase in planting across the campus.

Work on the Brunswick Park scheme is expected to start later this year, subject to obtaining the necessary planning consents.