Video-based therapy might benefit babies at risk of autism
Newsroom

Video-based therapy might benefit babies at risk of autism 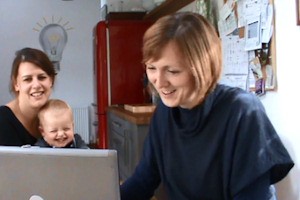 Researchers at The University of Manchester have, for the first time, shown that video-based therapy for families with babies at risk of autism improves infants’ engagement, attention and social behaviour, and might reduce the likelihood of such children developing later autism.

Commenting on his paper, published in The Lancet Psychiatry journal, lead author and Professor of Child and Adolescent Psychiatry at the University, Jonathan Green, said: “Our findings indicate that using video feedback-based therapy to help parents understand and respond to their infant’s individual communication style during the first year of life may be able to modify the emergence of autism-related behaviours and symptoms.

“Children with autism typically receive treatment beginning at three to four years old. But our findings suggest that targeting the earliest risk markers of autism — such as lack of attention or reduced social interest or engagement — during the first year of life may lessen the development of these symptoms later on.”

Previous research has found that the earliest risk markers of autism — such as a lack of attention to a parent, reduced social interest or engagement, and decreased eye contact — may be present as early as a child’s first year of life, but until now, no treatment trials have worked with children from such a young age to assess the possibility of modifying these early markers with the aim of reducing later risk of developing difficulties associated with autism.

In the study, an adapted Video Interaction for Promoting Positive Parenting Programme (iBASIS-VIPP) was delivered over five months to infants aged seven to ten months, who had a higher chance of developing autism because they had an older sibling diagnosed with the condition.

The aim of the Programme was to prevent or lessen the full onset of autistic symptoms prior to diagnosis, by optimising the babies’ social interaction during the first year of their lives.

Fifty-four families with an infant at high risk of autism were randomly assigned to either the iBASIS-VIPP programme or no intervention. The iBASIS-VIPP group received a minimum of six home-based visits from a therapist who used video-feedback to help parents understand and respond to their baby’s individual communication style to improve infant attention, communication, early language development, and social engagement.

Tara Hardacre from Romiley, Stockport took part in the study. Her son Lenny was considered at an increased risk having a sibling, an older brother, who is autistic.  She said: “The home visits and activities we were asked to complete were particularly helpful.  I was worried that Lenny was autistic too, so I was constantly looking for signs of autism.  I was shown what to expect in terms of communication from him, so I felt more confident about the signs to look out for and how he should be developing, which meant I worried a lot less and I stopped over-analysing each stage of his early development.

“Lenny is not autistic, but as a parent with a child who is, I felt it was important to take part in the study which may help with earlier diagnosis and earlier intervention in the future.”

The findings suggest that the therapy may be able to modify the emergence of autism-related aspects of development during infancy. There were also changes in parents’ behaviour, such as being less directive in their interactions whilst increasing infants’ attentiveness. However, reduced responsiveness to language sounds was noted in infants in the video therapy group.

Although the findings are encouraging, the authors caution that because of the relatively limited number of participants, their treatment effect estimates have wide confidence intervals, meaning that larger studies will be needed before researchers can make definitive conclusions about the therapy’s effect on preventing or reducing autism symptoms.

According to Professor Green: “Previous research has shown that parent-based interventions  similar to the one we tested here, but delivered later in the pre-school years and to children already diagnosed with autism  tend to have the greatest effects on parent-child interaction, whilst having little impact on actual autism symptoms.

“In contrast, the video-based intervention we tested in this study in early infancy seems to have wider impact on a number of behavioural effects and risk markers for later autism.

“The results suggest that the video-based therapy we tested may have a moderate effect on reducing some children’s risk of autism, although larger studies will be needed to confirm this.”

The full paper can be read here.