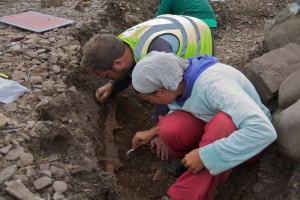 The UK mainland’s first fully intact Viking boat burial site has been discovered by archaeologists working in the Scottish Highlands.

The 5m-long grave contained the remains of a high status Viking, who was buried with an axe, a sword with a beautifully decorated hilt, a spear, shield boss and bronze ring-pin.

The Viking had been buried in a ship, whose 200 or so metal rivets were also found by the team.

The 1,000-year-old find, on the remote Ardnamurchan Peninsula, was made by the Ardnamurchan Transitions Project (ATP) which is a team led by experts from the Universities of Manchester, Leicester, CFA Archaeology Ltd and Archaeology Scotland

Funded this season by The University of Manchester, Newcastle University and The Leverhulme Trust, the project brings together students and academics at what may be one of Britain’s most significant Viking sites.

Other finds included a knife, what could be the tip of a bronze drinking horn, a whetstone from Norway, a ring pin from Ireland and Viking pottery.

Dozens of pieces of iron yet to be identified by the team were also found at the site, which has now been fully excavated.

Co-Director of the project and archaeology Teaching Fellow Dr Hannah Cobb, from The University of Manchester, has over the past six years been excavating artefacts in the Ardnamurchan Peninsula underpinning 6,000 years of its history.

Dr Cobb said: “This is a very exciting find. Though we have excavated many important artefacts over the years, I think it’s fair to say that this year the archaeology has really exceeded our expectations.

“A Viking boat burial is an incredible discovery, but in addition to that, the artefacts and preservation make this one of the most important Norse graves ever excavated in Britain.

“Viking Specialist Dr Colleen Batey from The University of Glasgow, has said the boat is likely to be from the tenth century AD.

“We are incredibly grateful to the generosity of the Ardnamurchan Estate who have supported our project and allowed us to work throughout the estate over the past six years.

“We are also very grateful for the support of CFA Archaeology who are currently providing the specialist storage for the fantastic artefacts that we found this summer.

“It has been an amazing opportunity for our undergraduate students to learn about archaeology at such an internationally important site.”

The team believe the site is also the first intact pagan Norse grave of its kind to have been excavated in mainland Scotland for 30 years and the first ever on the West Coast Mainland.

But the site has yielded other riches over the years, including an Iron Age fort from between 2500 to 1500 years ago this year.

Dr Oliver Harris, project co-director from the University of Leicester’s School of Archaeology and Ancient History, said: “This project examines social change on the Ardnamurchan Peninsula from the first farmers 6000 years ago to the Highland Clearances of the eighteenth and nineteenth century.

“In previous seasons our work has examined evidence of changing beliefs and life styles in the area through a study of burial practices in the Neolithic and Bronze age periods 6000 - 4500 years ago and 4500 to 2800 years ago respectively.

“It has also yielded evidence for what will be one of the best dated Neolithic chambered cairns in Scotland when all of our post excavation work is complete.

“But the find we reveal today has got to be the icing on the cake.”

Journalists are welcome to see the artefacts which are being currently stored at the CFA Archaeology Ltd  in Edinburgh between 10am and 12am on Tuesday 18th October BST.

Oliver Harris and Phil Richardson conducted the excavation while at Newcastle University.