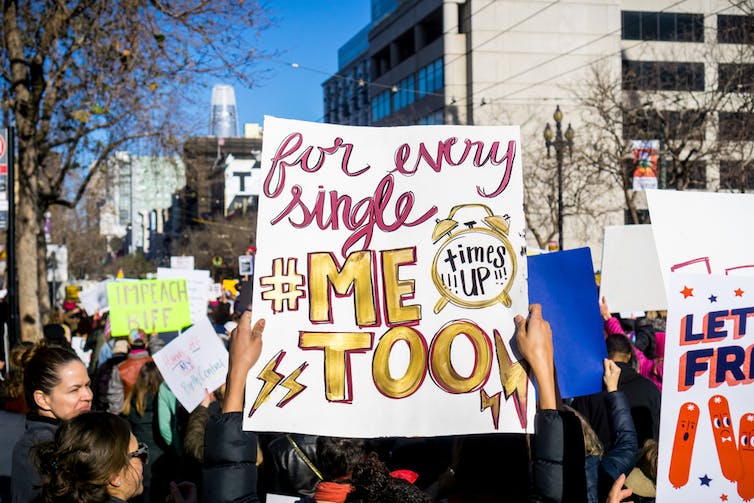 Sign displaying the #metoo and #timesup message at the Women’s March in San Francisco in January, 2018. Shutterstock/SundryPhotography

by Shahla Ghobadi, University of Manchester

Inspiring stories of social activism, such as the Civil Rights movement and the fight against climate change, abound in history. And it is generally thought that the new social media era has helped cases of activism to succeed. But our research has revealed some major threats, which activists need to understand if they are to be successful in getting their message across to the masses.

Social activism refers to a broad range of activities which are beneficial to society or particular interest groups. Social activists operate in groups to voice, educate and agitate for change, targeting global crises.

Take, for example, environmental groups such as Greenpeace which aim to curb climate change by targeting governments and major manufacturers with poor environmental records. Or the anti-sweatshop movement, which started with a group of activists in the 19th century organising boycotts aimed at improving the conditions of workers in manufacturing places with low wages, poor working conditions and child labour.

These days the voices of dissent have increasingly been carried via the evolving medium of the internet. From #Metoo, #TimesUp and #WeStrike to #NeverAgain and #BlackLivesMatter, social activists wield the power of the internet to pressure powerful organisations.

The group 350.org, for example, is made up of climate change activists. The group uses online campaigns and grassroots organising to oppose new coal, oil and gas projects. Its aim is to get society moving closer to clean energy solutions that work for all.

Online activism allows activists to organise events with high levels of engagement, focus and network strength. On the one hand, researchers suggest that the anonymity offered by online communication provides the possibility of expressing the views of marginalised minority groups that might otherwise be punished or sanctioned. Online activities reinforce collective identity by reducing attention to differences that exist within the group (such as education, social class, and ethnicity).

But other research argues that while this modern form of activism may increase participation in online activities, it might merely create the impression of activism. Or it may even have negative consequences, such as creating social stereotypes including those about feminists and environmentalists or getting social activists arrested as is the case in authoritarian countries.

The aim of our research was to develop insights that would obtain better outcomes from online activism, targeting some of society’s most important issues. During our study, we collected data from three YouTube cases of online activism. Our findings suggest that online activism delivers a temporary shock to the organisational elites, help organise collective actions and amplify the conditions for movements to form.

The elites fight back

But these initial outcomes provoke the elites into action, resulting in counter measures – such as increased surveillance to track activists. For example, some governmental authorities intensified internet filtering, blocked access to several websites and decreased the speed of the internet connection to slow down social activism. These measures prompted self-censorship among activists and a loss of interest among the public in relation to the cause and contributed to the ultimate decline of social activism over time.

Our study challenged the optimistic hype around online activism in enabling grassroots social movements by suggesting there is a complex relationship between activists and those groups they are targeting, which makes the outcomes very difficult to predict. As different parties with different interests intervene, they either encourage or inhibit activism.

While encouraging actions can take the form of support (such as the thousands of women around the world who posted on social media sharing their stories under #metoo), inhibiting actions may come in the form of information asymmetry (strategies such as filtering and surveillance) from elites.

Inhibiting strategies are not limited to authoritarian organisations. Senior managers may also monitor email correspondence of staff, set up structures and hierarchies for access to organisational information, and use information provided by secretive companies to check the status of their employees (for example, blacklisting workers perceived as trouble-makers).

Online activists should understand that the dynamics of reaching collective action might not necessarily be the result of critical thinking, lifelong learning or other dimensions of civic engagement. Journalist Nicholas Kristoff has talked about how the anti-sweatshop movement “risks harming the impoverished workers it is hoping to help” by causing mass job redundancies. Similarly, our main message is that online activism could prompt reactions that will result in unintended and long lasting consequences for the activists involved.

A common and frequently used approach that risks these types of consequences is to share emotive information through social media. While this is used to inform and capture people’s attention and mobilise as many people as possible, our study suggests that more thought should be put into the consequences of information sharing and what information is most appropriate to be shared.

Activists may need to spend more time and energy to create and share information that is less emotive and help people learn about the underlying causes of problem. For example, the activism videos we have researched and commonly see on the internet are essentially reactive and emotive.

Instead of focusing on the problem and the need for change, activists can share information that explains why and how the current situation has been created and what can be learned for the future. Online activism in such manner can gradually lead to the development of people who are capable of generating new knowledge and wisdom to respond to changing social environments. However, that requires strategic patience and that is often a scarce resource among activists desperate for change.