The latest news about psychology 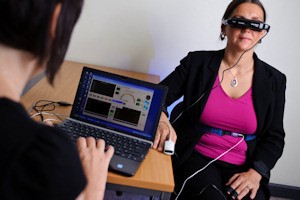 Nervous drivers are being helped to overcome their road phobias by donning Cyclops-style goggles that transport them to a three-dimensional virtual world.

Researchers at The University of Manchester have recruited volunteers with a variety of driving phobias to test whether virtual reality can be used alongside conventional psychological therapies to help tackle their fears.

The Virtual Reality Exposure Treatment (VRET) will allow participants to drive on virtual roads and confront their fears, whether they might be driving over bridges, overtaking slow-moving traffic or taking to the motorway or dual-carriageway.

“Phobias may develop from a real-life event but the levels of anxiety and avoidance that results becomes wholly disproportionate to the incident that led to the phobia and can become a major disruption to the way people lead their lives,” said Caroline Williams, who will be carrying out the research in Manchester’s School of Psychological Sciences.

“A fear of driving, whether it has developed following a road traffic accident or for other reasons, can escalate into a situation where individuals are too scared to drive at all.

“The advantage of using VRET is that it can be carried out in a safe environment rather than on real roads, which in extreme cases, could put the volunteers, therapists and possibly other road-users at risk through the adoption of defensive driving behaviours, such as braking harder or going slow on motorways, by the phobic subject. It also helps the person with a phobia to tolerate the level of exposure to the fear as it is tightly controlled.”

The volunteers will wear the hi-tech goggles, which resemble those worn by the X-Men character Cyclops, to transport them into a virtual driving world, while sensors placed on their fingertips and chest area will measure anxiety levels.

Some of the volunteers taking part in the study have developed their phobia following an accident but others have no obvious cause. Among the phobias are fears of driving over bridges and fears of motorways: even the sight of blue motorway signs can be a trigger for some people.

Ms Williams added: “Many of our volunteers have found it difficult to get treatment for their phobia through the NHS and, as a result, have been untreated for many years. The virtual scenario will allow volunteers to come to terms with and challenge their own fear in a safe and controlled environment. We hope this will result in less resistance to treatment, increased awareness of the need for such treatments and may even reduce the amount of time people spend in therapy due to its efficiency.

“Future studies could use the virtual treatment to tackle other phobias which could mean a major breakthrough in this type of therapy; the possibilities could be endless.”

The research, which is being led by Professor Nick Tarrier, has been funded by the European Union.