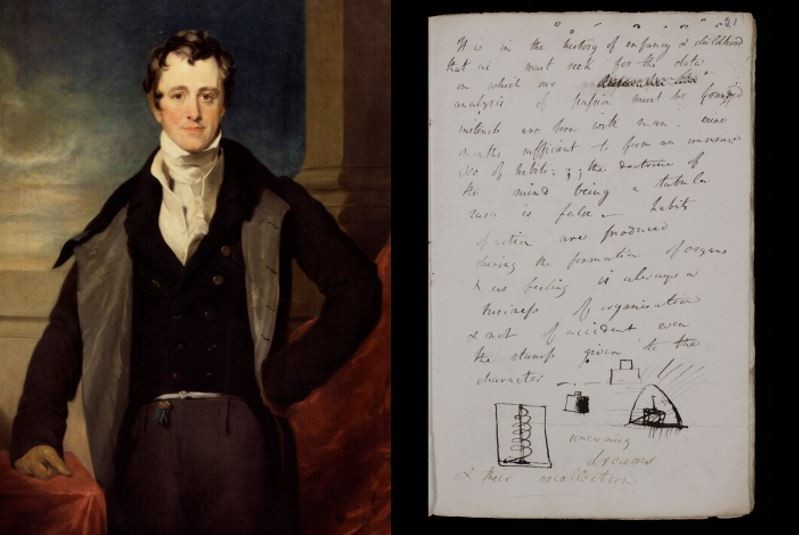 A new project to uncover previously unpublished material from the early nineteenth century’s ‘foremost man of science’ launched online on 29 June, and the organisers are seeking volunteers to help.

Sir Humphry Davy (1778-1829) discovered more chemical elements than any individual has before or since. His achievements saw him rise up through society’s ranks from relatively modest origins to become, just over 200 years ago, the President of the Royal Society.

In 1815, he invented a miners’ safety lamp that came to be known as the Davy Lamp, saving countless lives in Britain and Europe, and vastly improving the nation’s industrial capability.

The £1 million project funded by the Arts and Humanities Research Council (AHRC) involves Lancaster University alongside The University of Manchester and UCL, and will use the crowdsourcing platform Zooniverse to bring to light Davy’s notebooks – the documents he used to work out scientific ideas alongside lines of poetry, philosophical musings, geological drawings, and accounts of his life.

Davy kept notebooks throughout his life, but most of the pages of these notebooks have never been transcribed before. Most entries have yet to be dated or considered in the light of what they tell us about Davy, his scientific discoveries, and the relationship between poetry and science.

In 2019, AHRC funding enabled Professor Sharon Ruston and Dr Andrew Lacey, both of the Department of English Literature and Creative Writing at Lancaster University, to crowdsource transcriptions of five of Davy’s notebooks, dating from between 1795 and 1805, using the people-powered research platform Zooniverse.

Following on from this successful pilot project, during which more than 500 participants from around the world transcribed 626 notebook pages in under 20 days, the project team will now crowdsource transcriptions of Davy’s entire 75-strong notebook collection.

Some 70 notebooks are held at the Royal Institution of Great Britain in London and 5 are held in Kresen Kernow in Redruth, Cornwall.

After the project, the edited transcriptions will be published online alongside images of the notebooks on a free-to-access website, as part of Lancaster Digital Collections.

Online and in-person discussions with participants will enable the project team to find out how transcribing Davy’s notebooks changes their views of how poetry and science could co-exist today.

On the wider benefits of the project, project lead Professor Ruston said: "The consequences of seeing the arts and sciences as divided and separate are serious. Viewing them as ‘two cultures’ hinders our ability to solve major world problems."

The Davy Notebooks Project will ask what we can learn that will help us to better understand the relationship between the arts and sciences in the nineteenth century and today.

To take part in transcribing Davy’s notebooks, sign up at Zooniverse.