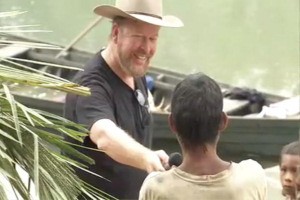 A renowned professor of linguistics is to argue his study of a remote Amazonian tribe has rewritten the rules of human language and the relationship between culture, thinking, and happiness at a free University of Manchester lecture today (19 March).

American, Dan Everett spent 30 years with the 400 Pirahã people who live in four villages beside the Maici River- a tributary of the Amazon.

Professor Everett previously taught at The University of Manchester before returning to the United States, where he is now based at Bentley University, Massachusetts.

He discovered the Pirahã are the world’s only people who lack number words or any concept of counting. They also have no past tense, no way of describing colours or concept of the ancient past or distant future.

Although their language has one of the smallest sets of vowels and consonants and one of the least complex grammars known among the world's 7000 languages, they can communicate by whistling, humming, and singing.

He is one of only three outsiders who can speak Pirahã.

In his new book Language: The Cultural Tool out this month, he argues the Pirahã’s language shows no evidence for recursion: the ability to combine endless ideas in a single sentence.

As recursion is a key component of Noam Chomsky’s Theory of Universal Grammar, the finding has forced linguists to reassess the basis all language.

Professor Everett, who is hosted by the School of Languages, Linguistics and Cultures, said: “The Pirahã are a culture obsessed with the present: they are not worried about whether they are going to eat later, because they know they can find fish in a plentiful river.

“They let each activity be dictated by their needs of the moment, rather than their worries of the future or their knowledge of the past. They have so much to teach us about taking each day at a time.

“I believe it is their culture which has influenced the entire grammar of their language, rather than as Chomsky would argue, some mysterious gene that crept into human evolution.

“If I’m right and Pirahã lacks recursion, then Chomsky must be wrong and recursion would not then be the universal basis for language.”

A  film about his life and work, Grammar of Happiness, has been awarded the European Jury Prize at the FIPA festival in Biarritz, France, the most prestigious festival in the world for television documentaries.

The film will air world wide in latter part of 2012, including the Smithsonian Channel in the United States, ARTE in Germany and France and ABC in Australia later this year.

“Every Pirahã child, woman and man knows the name of every single species of Flora and fauna in their environment.”

Professor Everett first stayed with the Pirahã in 1977 as a missionary, but he found them to be so content with their life he eventually relinquished his own beliefs.

He said: “There was no work to do as a missionary. The Pirahã were already happy and don’t believe in hell or heaven, so taking the message of gd to them was like taking ice to the Eskimos.

A four day boat ride from the nearest road means the Pirahã receive few visitors, though in recent years the Brazilian authorities have set up permanent buildings and  school.

He said: “The Pirahã have remained vibrant for all of their history and have resisted attempts from missionaries to convert them though current developments are the biggest challenge they have ever faced.

“But my bet is they will stay strong.”

Professor Everett is available for interview.

Dan Everett’s lecture will take place at in G21, Mansfield Cooper. The event is free – but for ticketing details contact Matthew Maloney, School of languages, Linguistics and Cultures matthew.maloney@manchester.ac.uk. The talk will combine film, stories, and science.

The  Cohn Institute at the University of Tel Aviv will be hosting a conference on Language: The Cultural Tool, on April 2.

Language: The Cultural Tool is published by Pantheon (US) and Profile (UK).