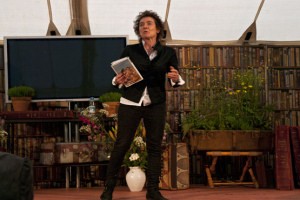 One of the country’s best known literary figures is to become a professor of creative writing at The University of Manchester.

‘Oranges are not the only fruit’ author Jeanette Winterson will begin a two-year stint at the University’s Centre for New Writing in October.

Winterson, originally from Manchester, will have a busy teaching schedule, including a postgraduate MA workshop, MA seminar and undergraduate lectures.

She will also hold four public events a year at The University’s Martin Harris Centre, with renowned guests from the literary world.

She succeeds previous holders of the post Colm Toibin, who completes his year-long tenure and Martin Amis who spent four years at the University.

Winterson was born in Manchester, and adopted by Pentecostal parents who brought her up in the nearby mill-town of Accrington.

Her first novel, the semi autobiographical Oranges are Not the Only Fruit, was published in 1985 when she was just 25.

It went on to become an international bestseller and inspire a popular  BBC television adaptation.

An author of novels, screenplays, children's books and essays, her latest book is the memoir Why be happy when you could be normal?

She is published around the world in 15 languages and writes regularly for The Guardian, The Times and the New York Times.

In August she will publish a novella in the new Hammer Horror series called The Daylight Gate about the Lancashire witches.

She was made an OBE in the 2006 New Year Honours list.

She said: “The Centre for New Writing at Manchester is a serious and exciting place where students are carefully selected and where there is a deep interest in what writing can do an at individual level and for the wider culture. I am from Manchester and the north is part of me; how I write as well as who I am. Let's see what happens next.”

Professor Dame Nancy Rothwell, the President and Vice-Chancellor of The University of Manchester, said: “We’re delighted that Jeanette Winterson will succeed Colm Toibin and his predecessor Martin Amis as Professor for Creative Writing at the Centre for New Writing:

“She is a brilliant novelist, a public intellectual, and a writer who makes the case that the arts matter in contemporary Britain. We are certain she will inspire her Manchester students and audiences.”

The Centre for New Writing aims to recruit and teach promising writers and critics of contemporary literature, and contributes to the cultural life of Manchester, the Northwest and beyond. Visit http://www.arts.manchester.ac.uk/newwriting/

There will be opportunities to interview Jeanette Winterson later in the summer when she returns from Australia.