Fascinating photographic album from the First World War gives insight into the working lives of women. 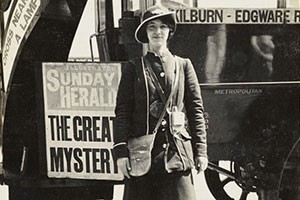 The latest addition to Manchester Digital Collections, Arthur Reavil’s photographic album of Women’s Work in Wartime, which is held at The John Rylands Library, provides a glimpse into an extremely important time of social upheaval on the Homefront.

The keyworkers of their time, the women photographed by Reavil are depicted in both urban and rural settings. They are documented performing critical roles such as repairing roads, working in factories and driving buses. They worked as mechanics, foresters and police. Many of these jobs were previously the sole preserve of male workers and would be closed to women in the period immediately after the war as servicemen returned to their jobs.

These images are a testament to a time when ordinary people stood up to ensure that life could continue as best as possible. The work that women undertook for the country was instrumental in the acceleration of women’s rights to the forefront of the popular imagination.

We invite you to explore the collection and draw parallels from then and now. In the image “Bus Conductress” (pictured) we see adverts and safety messages that echo today’s "stay safe" and "stay alert".

This album is a fascinating insight into the working lives of women during the First World War. In the current world-climate, the album now has even more powerful resonance with a modern audience, documenting and celebrating women as the critical keyworkers of the period.

The album is available to view now via Manchester Digital Collections